Short post today. I spilled some of Kulos' guts today, and I'm pretty happy with how it worked out.

So, step one is complete. Now I gotta wait for his arms to arrive and I can continue. See ya round :)

As part of my attempt at running "The Wolf Time" scenario from the "Book of the Astronomican" I've been trying to find a suitable miniature that I could use as a proxy for governor Kulo....the main Ork Character in the game. The search for him has proven to be nothing short of painful. To give you a hint as to why it's been so hard to find one, have a look at his passport photo below:

As you can see Kulo is one big ugly Ork. In fact, he's SO big and ugly that he's rumoured to be THE fattest Ork in the entire galaxy! Unfortunately, Citadel never produced a miniature version of him.....or any of the Wolf Time characters for that matter. And because people generally prefer tough & muscular looking Ork mini's to overweight, flabby ones, there just ain't no Ork miniature available out there that I could use (straight out of the box) as a proxy for him.

Last year I searched online for one & came across none. So I turned to the Oldhammer forum for help. And although the ideas put forward on there were helpful, they just weren't what I personally had in mind as suitable candidate that I could easily (or believably) convert into a Governor Kulo. So after a few weeks I just gave up.

Fast forward to now and I've become all enthused again. Reading the scenario through from start to finish again can have that effect :) But this time I searched a hell of a lot more than I did last time online, mostly on Google images. I think I looked at just about every picture that contained the words "fat Ork", "fattest Ork", "obese Ork", "large Ork", "huge Ork", "overweight Ork", "Ork boss". I even resorted to replacing the Orkoid races with "Orc", "Ogre", "Troll" and even "goblin"! But I still had no joy.

As a side note; I never realised until I began this search that there was such a thing as Orc porn.....the world sure has some interesting people in it doesn't it.


After my lengthy & ultimately failed adventures in "The land of Google images" came to an end I decided to have a look through Stuff of Legends, just in case there were some Ork mini's that I'd never seen before. I'm not the worlds biggest expert on all things Orcish to be honest, so I thought it'd be worth a try......but still nothing.

Ok, next on the tortured path (I wasn't giving that easily) was eBay. This too (just like the previous searches) turned into a massive time sink. It wasn't a total waste of time though, as I turned up a few likely candidates, but these were soon followed by varying levels of fail.

Here's a few of them that I came across on me e-travels:


After this sort of lengthy & overall negative experience you'd think I'd be ready to give in wouldn't you? But noooo, I'm thick in the head you see. So, I just kept on truckin, one painful mouse click at a time.

Next up was Collecting Citadel Miniatures Wiki. A site that I've very rarely had the need to use before. And it's a good thing that I tried using it too, because it was here that I stumbled across a mini range that I never knew existed before, the Freebooter Minderz. In it I found a promising little nugget, a plump looking RT Ork. He would definitely need some work, but his beer gut at least pointed me in the right direction as to where I'd be needing to add GS too. And if I wanted to make the fattest Ork in the Universe I'd be needing all the pointers I could get.

So, after a quick search on Ebay I turned up quite a few of these Minderz. I just had to pick the one that I thought was the best base mini to begin with & at a reasonable price.

Here's the one I procured:

His face already looks a bit like Kulos' to me, so I won't need to do too much in that area. I'll mainly be working on his girth.....and his obvious lack of arms too. I've got a few things coming in the post to help converting him up, so I'll begin carving into him once they arrive.

So, what do you think? Is he a likely candidate? Or a complete and utter waste of my time and yours?


I bet that there'll be one of you guys out there that will point out where I could have gotten a fat Ork mini that looks twice as good as this, on an easily found website & for half the price as this one :D
Posted by Mr Papafakis at 12:18 8 comments:

I was able to finish off the Space wolf characters for the Wolf Time campaign a few days ago. I had to wait for a chainsword to arrive from a bits trader before I could complete the last one, the one pictured below......in all his plastic majesty!

I thought I'd do a bit of a tutorial on how I modified this guy, so here goes,

To get the outstretched arm holding the chainsword I had to select the best candidate to chop up. There's only a couple of options (both L&R) with the RBT01 kit to choose from. But because the detail is quite basic you can use either side for the opposite appendage if you want. In this case I didn't need to, but I thought I'd mention it anyway.

There's two to choose from on the sprue, but they both have similar problems. The first issue, they both have their hips rotated at a downward angle, almost at 45 degrees. Which is "fine" for general poses, but it really does limits your choices. And there's no easy fix for it either! You can't just cut the legs off at the hips and rotate the groin around into a perpendicular position. Not only will his knees be knocking together, but he'll also end up looking like he's sitting on the loo too.....not a great look on the pretend battlefield now is it?

The second problem is that the legs aren't aligned along any axis. What I mean by this statement is that when viewed from the front or side, the thigh & shin are misaligned at the knee. He's basically bow legged. The only exception to this is the right leg of the right set of legs, but he's good in only one axis (viewed from the front), but his foot is angled off....not much of a gain.

What this all boils down to is that you really need to do some major surgery to the hip or knee joints, as well as the groin, if you want to change their pose....into a convincing pose that is! If your aim is to make them look all fucked up & mutated then just do a basic "cut & shut" modification....you'll be in heaven!

Ok, so he was the last main dude to be finished....or "almost" finished. Gotta add a few little things to them here and there & then they'll all be warm & toasty. I took a group shot of them in their current state, posing in imaginary threatening poses to my camera, enjoy:

These guys will get the attention the deserve once all the other members of the contingent are finished off.

I've gone and just finished putting my Navigator together. I'm happy with how he's worked out, still gotta add some bling to him here & there, but he's mostly done. Here, take a look for yourself:

Why did I choose a bug eyed head for him? Well, after reading through the description for Navigators in RT I decided that I needed some sort of mutation.....it helped that it was also the easiest conversion to do too :p

I get the feeling that they were trying to insinuate that Navigators were descended from the ancient Slann & that their supposed to look a bit freaky to us humans too. Here, have a look at this ugly fucker from The Book of the Astronomican and you'll see what I mean:

Answer: Their conversions have all been made possible from just one donor mini! Here he is, pre- butchery:


I'm all out of mental juice for now. Hope you got some perverted enjoyment out of this post....I know I did :)

See you in the soup.

Posted by Mr Papafakis at 03:46 No comments:

Just thought I'd blog about one of the method's I use to personalise my RBT01 Space Marines.


I basically cut the pistol off of the hand, cut the forearm off, turn it 180', drill right through the centre of it all & pin it together. Oh, and I added a mag too.

There's a few tricks to modifying these placky marines, one of them was even mentioned soon after the original kit was released, in The Compendium by Nick Bibby I think? That was, to cut off the shoulder bosses from the bodies so that the arms fit better. Back then, when I first read this, I thought it was fine to read this type of advice. But if you think about it, this sort of internal comment wouldn't be allowed nowadays. Telling your customers that "Our brand new product has a design flaw, to fix it you'll need to hack bits off of it for it fit together properly". Naaahhhh, I don't think this would pass today. Anyway, I'm glad I read about it back in the day....it helped :)

I like playing around with their poses, It's quite easy to do with plastic...drills easy :) But the bugger is filling in the gaps that I end up creating in the process. I'm yet to settle on a tried & tested method to solve this issue. Obviously I'll be trying out a few different materials in the coming weeks to find a "good" one.

Another quick post, just to let you know that work has commenced on the assembly of the Space Wolves. I couldn't resist doing some conversion work on them, but I think I might put the next squad together without snipping off arms,legs or hands, just for a change :) 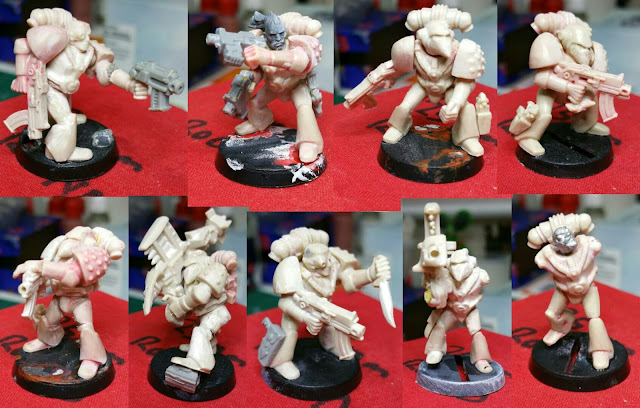 In the above pic (collage to the rescue) you might be able to see that I've drilled out the barrels on all of the weapons, it's a piece of cake on placky mini's so it was no trouble to do them all in the one go. You may have also noticed that there's a few of them with one of their legs not touching the base....I'll be giving them something to stand on or leave them in the "mid step" position.

These guys aren't finished yet either. They still need the modified section filled in & smoothed out, but I think I'll do that work once the lot of them has been completely assembled.

Anywho, until next post....cheerio lead lovers :)