Ernys' running Orctober again, Yahoo!!!! And as such I thought I'd offer up Kulo as my entry for this year. This is the awesome illustration Erny put up for the competition....his really talented isn't he! 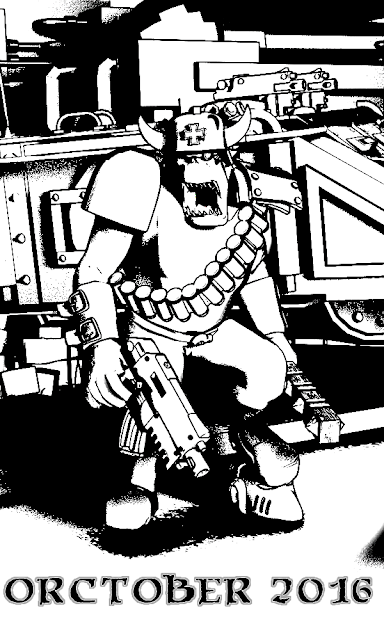 Anyway, here's some WIP shots of THE fattest space bastard in the known universe;

So, now all I've got left to do is fatten up his head & mount it, make another bolt pistol, fabricate a Neuro Disruptor.....and, oh yeah, a lot of GS too :D

Realistically, I don't think I'll have him ready for Orctober, but that's ok. I was late for it two years ago! Anyway, it's all good. He'll get done, soonish.

It's somewhat fortuitous that I'm working on an Ork at the moment, seeing as it's the month of Orctober and all. Kulos' getting closer to being finished, which means that my objective of completing the required Wolf Time mini's is slowly eaking it's way to completion.

Last post I talked about a potentially quick & cheaty technique that I was going to try. One that I hoped would save me a lot of time in the sculpting side of this conversion. Well.....it kinda sorta failed, but I'll describe my "cunning plan" anyway, as someone "may" find something of use in my hair brained scheme?

I first took a press mold of the Freebooter Minder with Oyumaru (Oh, by the way, I don't heat this stuff up with water anymore, introduces water inclusions into the mold. I just warm it up with my Heat-gun, works great!) and I tried painting the inside of it with PVA glue, hoping that I'd have a flexible skin to basically dress the base model in. It didn't work, too many bubbles. Mind you, I still think the theory is sound. Maybe a different glue would have yielded adequate results?

Here's a few pics of my mental method;

After that failed I thought about using some other type of material in place of the PVA, so I tried using GS. Unfortunately, I forgot to take pictures of this process, so I'll just describe it. I rolled the GS as flat as I could make it with a AA battery on a sheet of baking paper. Then I laid the "sheet" over the mold & pressed it in, working it into all the nooks & crannies with the end of a chopstick...as you do. The result? It worked out pretty good!

Here's some pics of the head section that I made with this technique;

But in the end this only resulted a normally proportioned flat face....not the FAT face I was after. Oh well, I'll just have to bite the bullet and attempt what I should have attempted in the first place i.e. sculpt his face the old fashioned way:( Sigh! Ok, enough of my experimental diarrhoea, What follows is a modest description of the real progress that I've achieved this week.

I decided to take take a press mold of the donor minis' chest. The previous post photo's didn't show it, but this guys a little too 2D for my tastes. I wanted to give him more of a gut, so I GS an extra one & stuck it to the original....here, have a look;


So, after stuffing about for a few days, I made a mock-up (held together with Blue-tak) of the ugly bastard. Apart from assembling him properly & GS him, there's only a couple of things that I need before I can begin. Those things are; waiting for a bolt pistol to arrive in the mail and then to convert it into the style from the illustration. And secondly, manufacture a Neuro Disruptor out of sprue off-cuts. Then it'll be all systems go!


Lastly, some of you may be wondering why I even bothered buying a mini to convert up in the first place? If all I was going to to do was to dismember him to the extent that he just became a blob of resin? And while it's true that there's not much left of the original mini, it still provided me with a proportional subject for me to work with. As a mental aid it was worth it (he was a dirt cheap mini anyway, so no great loss really) as it helped me to create a mental picture of what Kulo should look like in my head. If that makes any sense?