In the previous post I blogged about the objective marker that I had made for this years RoC game at BOYL. In this post, and the one's that will follow over the coming months, I will be blogging about each retinue member/unit that I'm making to play said game. Almost all of the minis will be converted to a lesser or greater extent. So I thought it might be fun to document the project, one retinue roll at a time. Let's begin........

First I generated my champion and then gave him four rolls on the retinue table. The chaos patron I chose for my warband was Khorne because blood, guts, bone and gristle are disgusting. Here's the basic warband that I rolled up:


And here is the champion in detail:

Due to some abysmal rolling on my part he can only fly at 1" and walk at 1". Therefore I figured that his followers must have taken pity on him in the past and procured some sort of basic mode of locomotion for him. To that end I decided to make a tracked vehicle with the basic movement rate of a human for him to ride on. He'll at least be able to engage the enemy in hand-to-hand, instead of just hurling insults at them from a distance.

His name is a mashing of two on-screen references. The first is from the movie Short Circuit and the second is from Dr Who. They were both chosen after he was built. The reasons will become obvious later on, trust me.

The mini I chose for the basis of my champion was a late edition GW Bloodletter.....3rd iteration I think. The vehicle is a tracked wheelchair from Ramshackle Games. 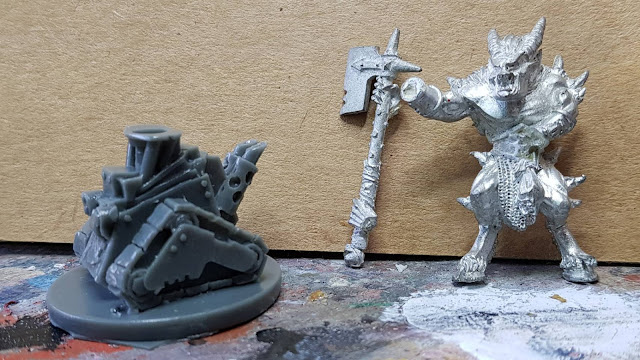 I began by butchering the donor mini to match his new physique, cutting down his legs to shorten them as much as possible. Pretty fiddly, but worked out in the end. I then cut the hands away from the axe and placed a plasma pistol in one (drilling out the barrel because Chris) and in the other hand I took the pommel from the axe and inverted it's position so that it was on top of his hand. This was to give the appearance of a control stick used to operate the wheelchair.

I carved a chunk of resin away from the top of the tracked vehicle to become the seating area for Johnny and then used a seat section from an old plastic Eldar bike, I think, to make the padding. Once I was happy with the positioning I pinned & glued the sucker in place.

His communicator/rad counter was combined into one unit. I thought a mahoosive boombox (a part from a Ramshackle bike) on the side of his head would be a fitting piece of equipment for a worshiper of Khorne, blasting commands at his minions at full volume! I used a bit from a mechwarrior toy to act as the mounting arm for it as well.

His wings were some old school Reaper wings donated to me by my mate Chris....the other one.....no, not you.....the OTHER one! Thanks a lot for them "Chris" :)

His lasgun was stowed in a cut down plastic straw, mounted on the side of the wheelchair with bent up paper clips. The combat blade was from the RTB-01 SM weapon sprue. I mounted that on the opposite side to the lasgun in a cut up and folded piece of cardboard. The eye protectors were just made with a bit of putty......nothin too flash.

All that was left for me to do was add a few other details like cables and pipes, then a bit of putty work here and there and he was ready for paint. I was remiss in taking a photo before I started to paint him. All I have is this silly little video clip that I'd shared with my mates though, so this will have to suffice:

My son pointed out to me after I had built him that he looked a lot like a rock star because he has a boombox, something that looks like a microphone beside his head, holding what appears to be a microphone in his hands and yelling at the top of his lungs......all well spotted! I actually quite like that image, rocking in the realms of chaos :D 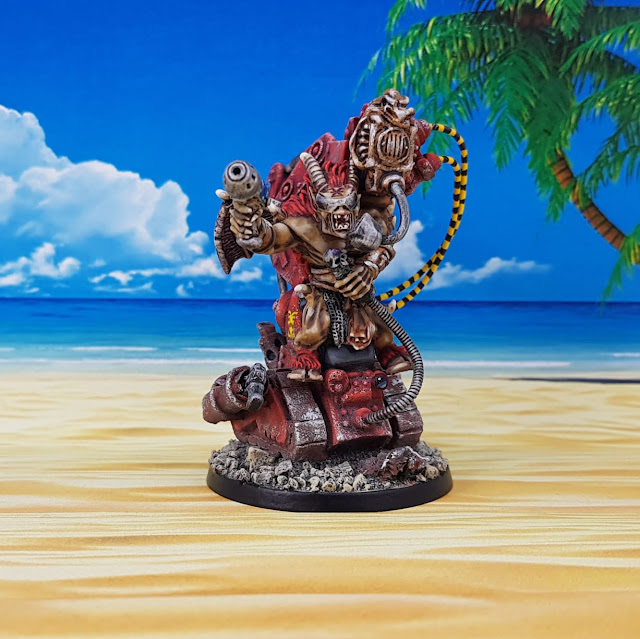 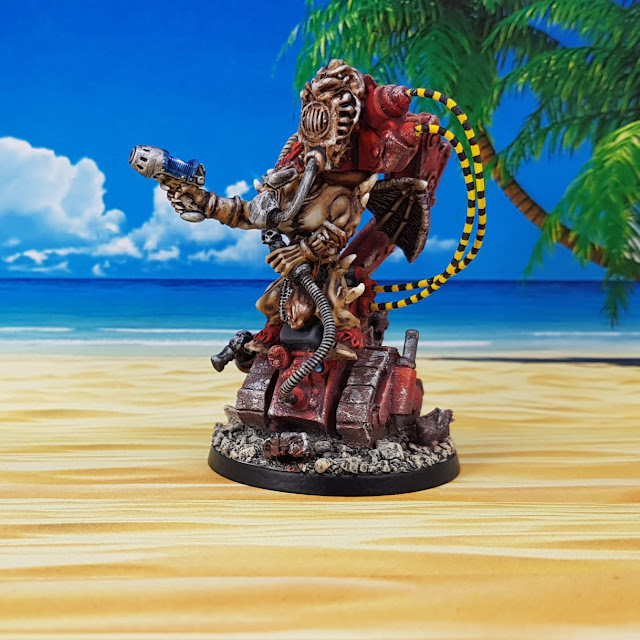 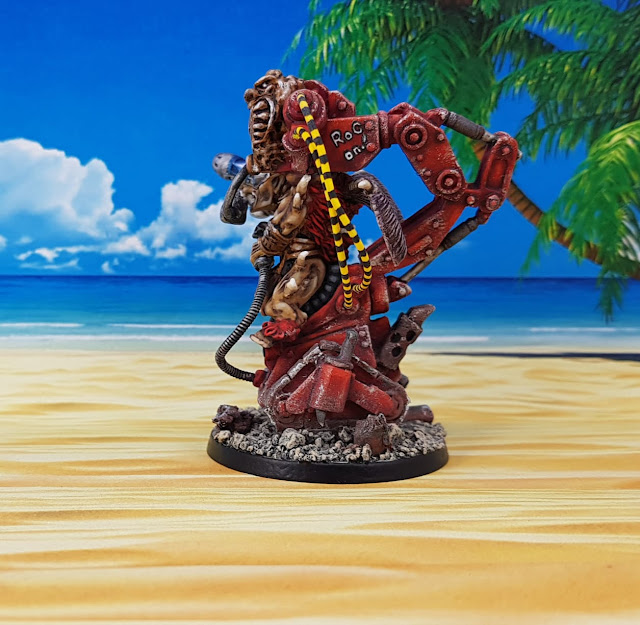 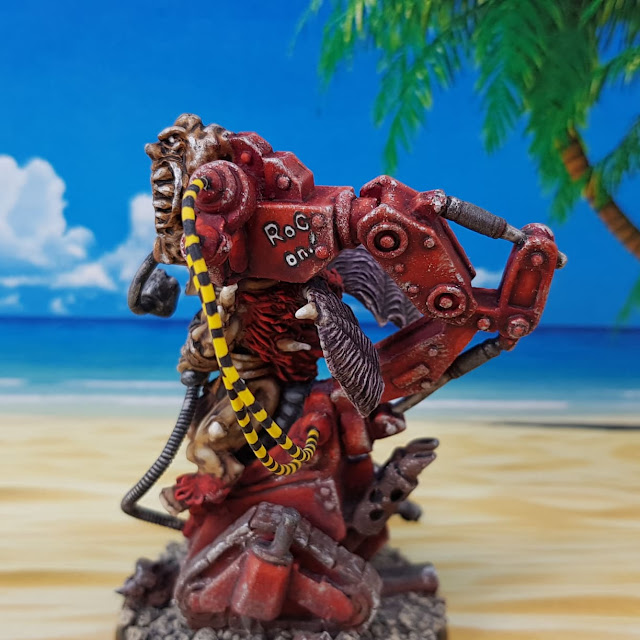 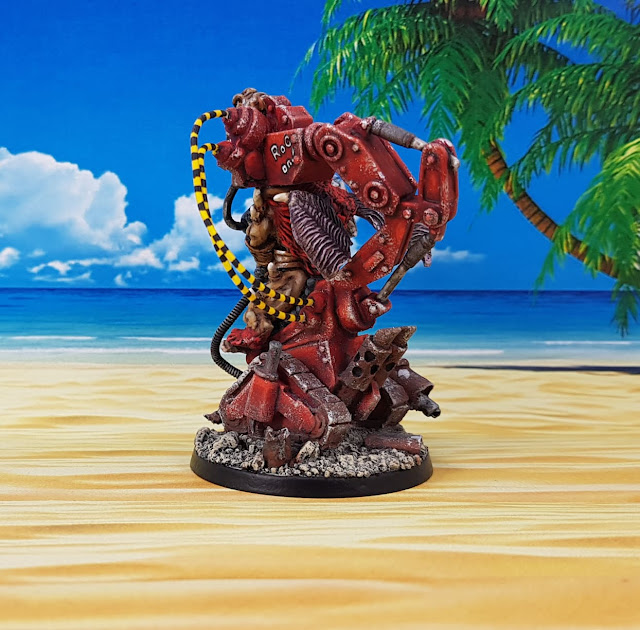 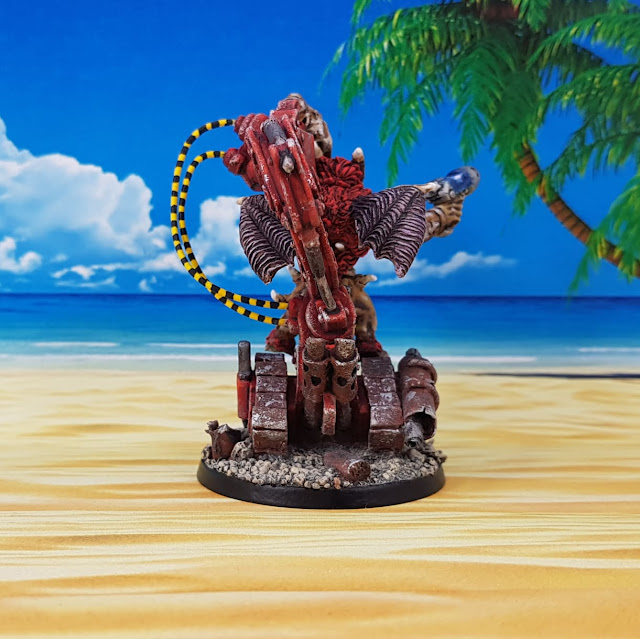 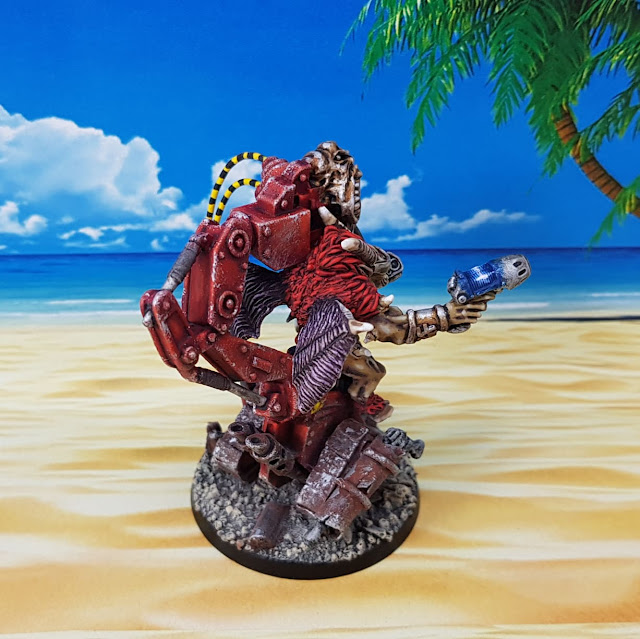 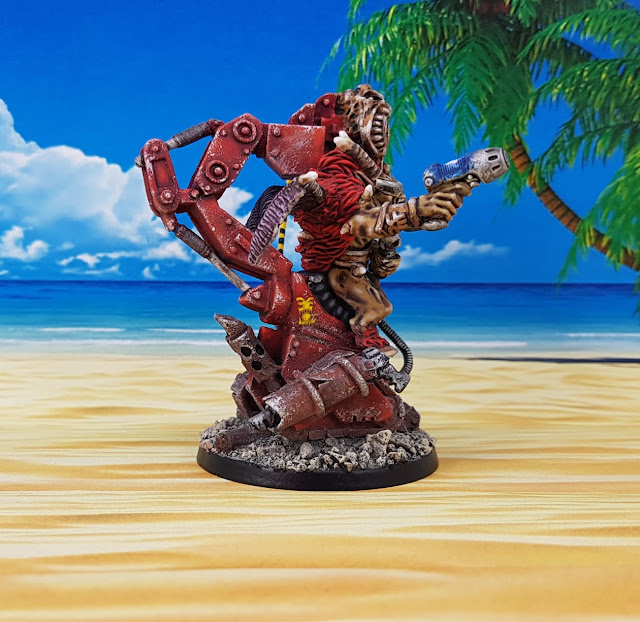 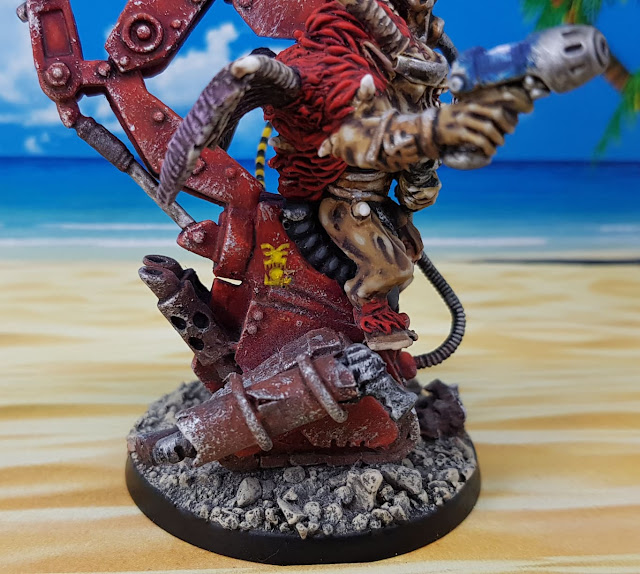 So, what do you think, did I capture what I rolled up? Does he look ridiculous? Would you run from this creature if you came across him or would you stop, point in his direction and laugh? If you answered yes or no to all of these questions then you have failed basic logic because one of those questions was double barreled :P

Anyway, I'm really happy with him, hope you guys like him too :)


Next up will be the Traitor Legionnaires squad.