A sorting out of cultural differences.....Rogue Trader style.

I played a total of four games while I was back in Aus for the past two months......not ideal, but I'll take what I can get (gaming wise & anything else really) anytime. So here is the first of the batreps.

The first scenario was thought up by my gaming buddy Rob_s, but unlike all the other previous battles we have had against each other, batrep duty has now been passed onto me. For the game, GM'ing responsibilities were Rob_s' domain. My son & I got to play as the protagonist's.

The setting was a place called Radtown, in and around an old mining facility. It consisted of a few shacks either side of a narrow road that lead off into nowhere. The opposite side of the camp backed onto a shore line. The water wasn't drinkable, but the lake did provide a good transport route for mining barges to deliver & pick up goods from. The rest of the area was sparsely populated with trees & a few hills.

It was a poor mining outpost that had long ago been abandoned by the Squat mining guild. It's resources plundered, the Squat's had moved onto other more lucrative sectors on the planet. Fast forward three lunar cycles & other life forms had decided to move in to claim what little remained. These interested parties consisted of two rival gangs.

The first was (played by my son) a Beastmen herd, led by a formidable Broo, who went by the name of Ram Man (oh well, they don't have a low Intelligence score for nothing). He & a group of eight other Beastmen had heard about an ammo cache in one of the sheds in the mining camp. They aimed to get there first so that they could gore as well as blast their enemies.

The second group was (played by the GM) a Human gang, called the Tunnel Snakes. Led by a dude going by the moniker of King Pliskin, he had eight other bad dudes in his retinue They had seen several goat tracks leading to & from the mining camp a few nights previous. This was not to be tolerated, sheep & humans had long ago been deemed "culturally divergent" on this mining planet (they still farmed their brothers for meat). Sooner or later they would come looking for the humans to extract revenge upon them. The Tunnel snakes thought it better to cull the herd before they themselves were eaten.

I had been given command of an Ork horde, led by none other than Thrugg Bullneck,. He had two 2IC's to lead the rest of his unruly mob. They were Snappa, who sported a mechanical claw...the Roboclaw 5000 model & Brad, who wore a blue imperial model power fist. These three leaders each lead a squad of five.

They'd had a few stoushes with the humies a few times in the area & they'd heard about Goatmen having fights with them too. The Ork's had had enough of these other element's encroaching into their territory. They'd decided to surprise them, by using some of their stolen merchant barges to make a landing near the edge of the mining camp. They'd teach'em both a lesson they soon wouldn't forget. If they could pull it off, they'd be rid of both gang's for good.

Here be pic's of the rumble in the interplanetary jungle: 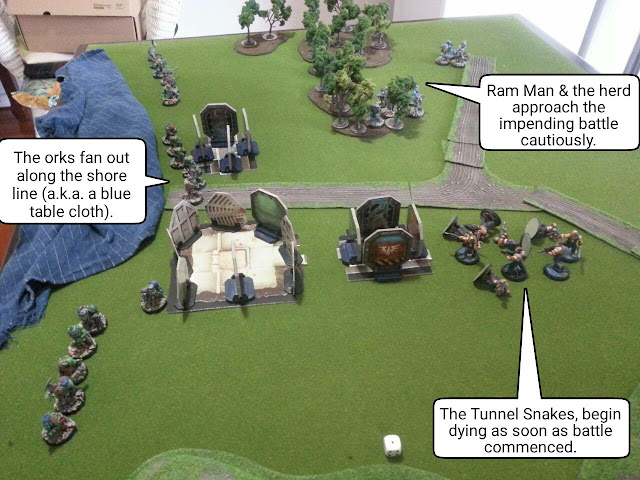 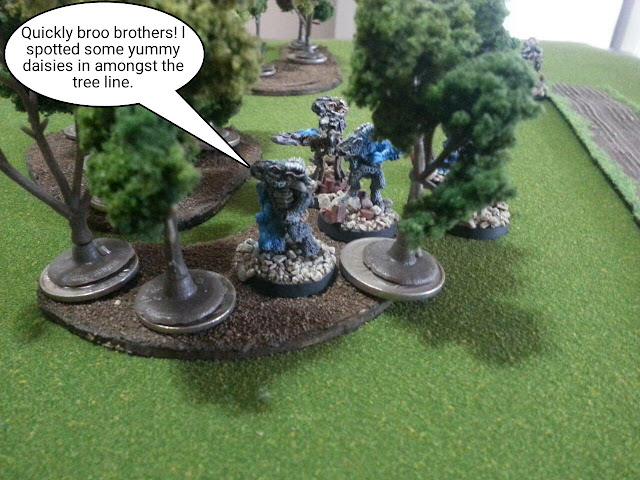 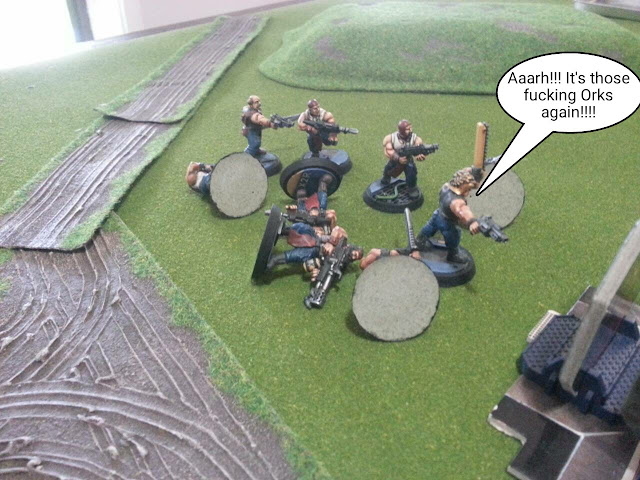 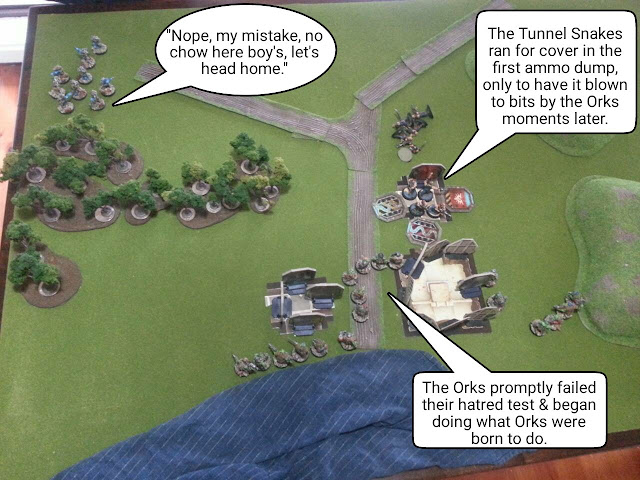 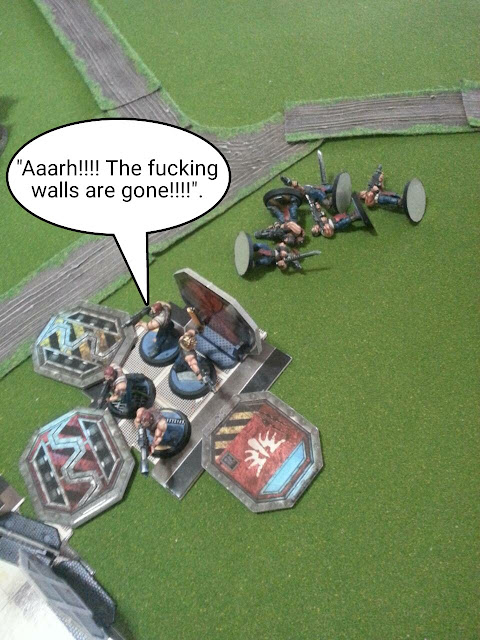 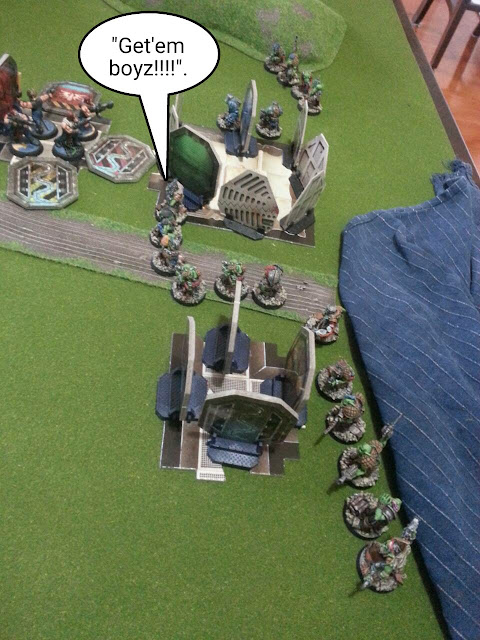 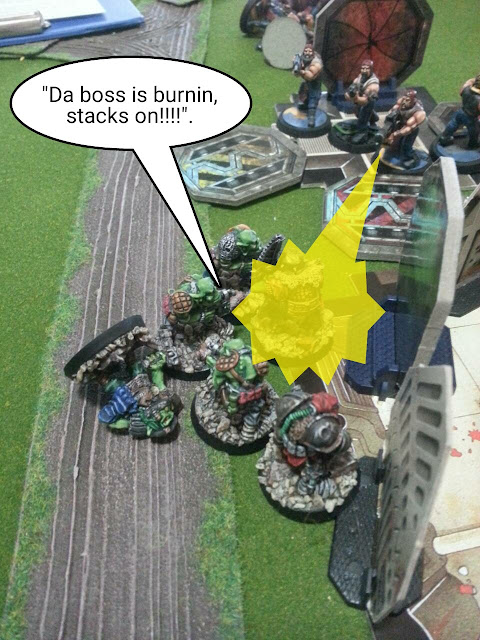 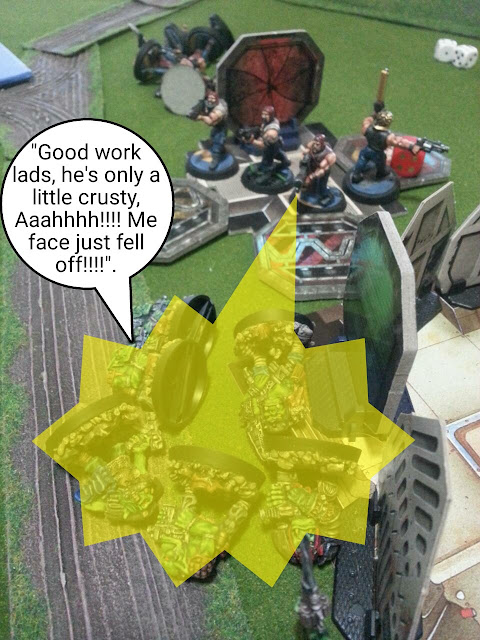 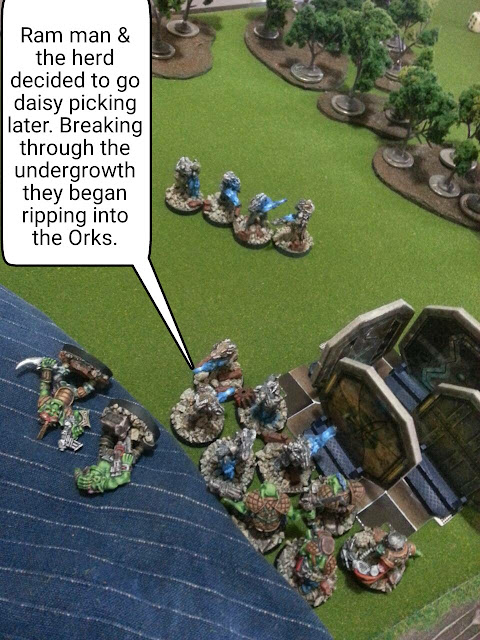 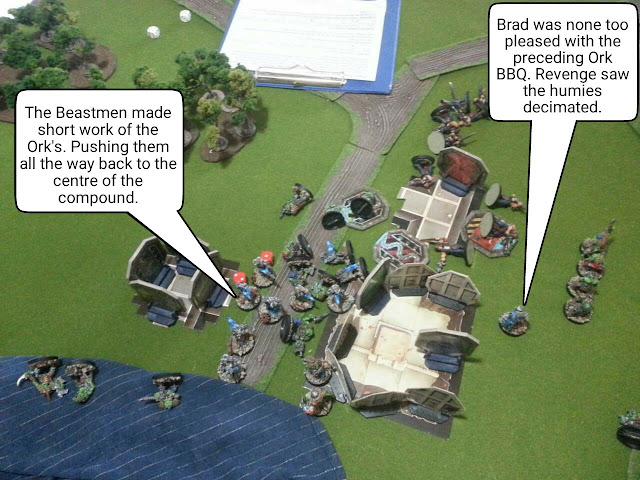 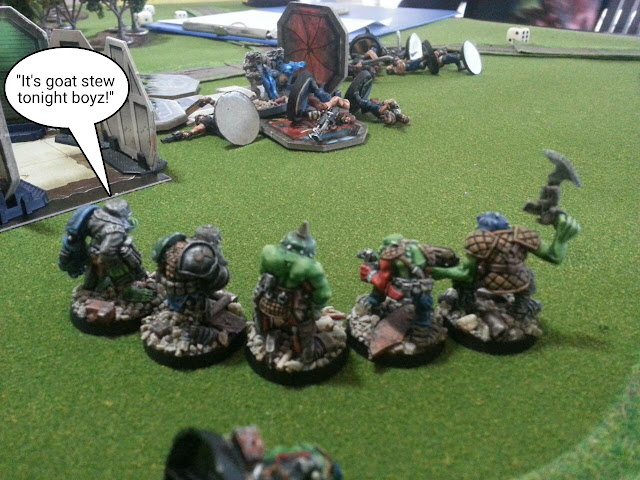 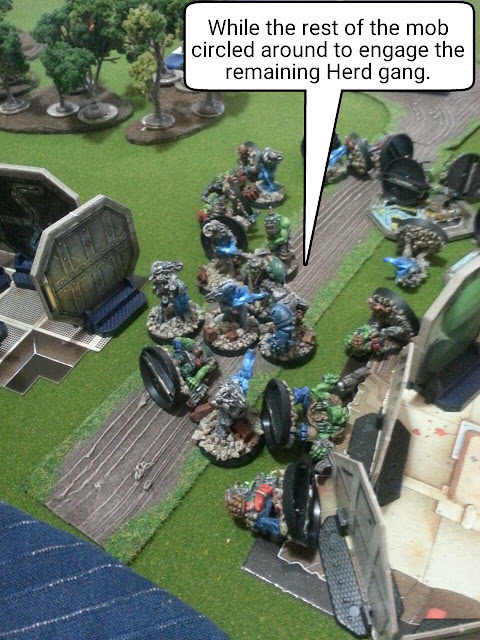 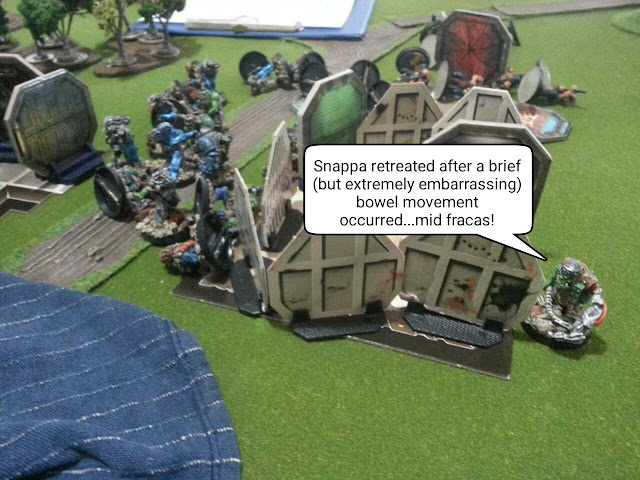 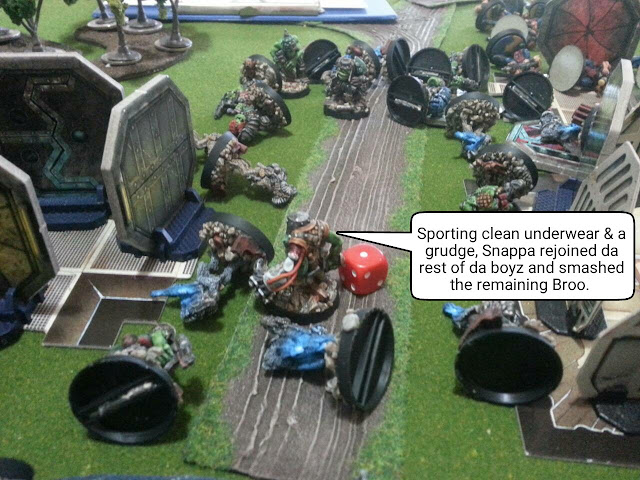 So, the end result of this game was all the humies were wiped out, but not before BBQ'ing Thrugg, along with his cohort who had just managed to put him out! The Broo had kicked the hell out of the Ork's most of the game, before they got their act together (rolling high number's helps, so I've heard) and wiped them out too. But the Ork's victory had come at a very high cost, only three remained to plunder the spoils of battle.


I tried to do this batrep a little differently, by using speech bubbles in the pics to describe the action. I'm not sure if it's entirely successful, but it is a damn sight faster than trying to write out all the action blow by blow. I didn't take enough pics during the game & we should have removed casualties....so it wouldn't have looked so cluttered in some of the final shots, but overall I'm ok with the end result. After all, Tis my first batrep :)

Cheers & all that other mooshy stuff :)