Yup, your reading it right, it's done.....and in record time too! Only two weeks.....amazing huh? I took a crappy Star Wars toy and converted into this thing;

Now, for the nitty gritty;

Control panel;
I got that idea from Stro'Knor Macekiller. His laptop screen looked pretty snazzy to me & because he usually takes close up pictures of his stuff it was quite easy to replicate. I'm pretty happy with the result. I decided to put a target on the joystick/pin....just coz.

Battery label;
I just couldn't help myself using that, even though I'm quite sure that it makes absolutely no sense at all to most of you. It's a TV commercial that's been ingrained in my psyche! I had to endure listening to this stupid thing for most of my teenage/adult life. You know the type of commercial I'm talking about don't you? The one were the company could only afford to made "one" and because it rated well in the first run, they decided never to update it, even after twenty odd years!!! In all fairness, it was funny...for the first couple of years :) Oh, and it was a google images & colour printer to the rescue job.

Smiley face;
Why not?

Coolant leak;
This was something I had to do to cover up an error I had made earlier. Originally, the "battery" was going to become a big induction trumpet. I was trying to run a flexible pipe from the rear of it, down into the hole where the headphone ended up being, but in doing so I had to cut out a larger hole for the tube. When I realised that it didn't look very good I scrapped it for the "Heatsink intake up front" idea. And so, I had to fill in the hole with something, a headphone looked good to me. I think it ended up looking good, having a large, radioactive "fuel cap" right behind the drivers compartment seemed quite logical in an RT setting.

Felix ride;
His name just popped into my head. And in my mind, you can't have an RT vehicle without some sort of graffiti.

Colour scheme;
Initially I wanted to paint it white, which i did. Then after I looked at it a while I began to think that maybe I should go for a different colour....didn't want it looking too much like my walker, that's got white legs. So, I gave it a black ink wash & then set about painting in the green crappy paint look. And actually, after I got close to finishing it I realised that the walkers' howdah is this colour green too! I must have some fixation with this colour, damn! Anyway, it looks ok.

Weathering;
I "was" going to weather it with oil paints, but from past experience, they take at least a couple of days to be dry enough to varnish. If I had the time I would have definately gone this route, as I was very happy when I used them last time. But I was under the pump, so I just used paint & pigments over a gloss varnish. once I was satisfied (out of time) I hit it with a matte varnish & added the Tamiya clear colours, three of'em in total, in three locations.

Overall, I'd have to say that I'm a pretty disappointed with the weathering, I over did it quite a lot. But there's no going back once you've applied it. Next project I'm gunna stick with oils, as I can clean them off easily during the application process & keep on trying until I get the result I want. But the jobs done now, and I'll leave it as is. I've learnt some more valuable kitbashing skills & recognise that I need to show a bit more restraint with my weathering techniques if I want them to look more realistic.

Now the only dilema I have left to overcome is how to pack the damn thing so it wont break in transit while on the plane :(

My apologies for the formatting, blogger was doing my head in with these different scaled images.This is the best i could do on my meds :P

That's enough of these guys for now. I have a sufficient supply of painted orks to play pretty much any sized game of RT that takes my fancy. I picked up a metric tonne of these guys at a convention a few years back (I think it was "Little Wars Melbourne" 2012/13). They were cheap, like me, and like most cheap second hand minis, painted terribly. Can't expect GD quality for peanuts now can you!

I put up their "Tubman's" quality paint jobs while I was back home last year, just so I could get some gaming in with them. But as soon as I got the chance I drowned these mofo's in Acetone & began painting in earnest.

Here's the culmination of almost a years worth of toil at my painting desk, gaze upon my (insert crude comment) & dispare!!!!

I'm really happy I've got Thrugg Bullneck too. He really does add something intangibly badarse to an ork army, like his some sort of leader of an outlaw bikey gang. Maybe it's just coz he came in the first box set? I'm not sure, but I likes him!

He was kindly donated to me by Captain Crooks, a fellow convict. Much appreciated Crooksey :)

Ok, that's it from me for a bit, I've gotta crack on & finish off the Grav tank by the end of this week. Wish me luck!

The Phantom Menace, what a retarded movie. Luckily for you & I this post has very little to do with the movie that won't be mentioned by name again. It has to do with a toy that I picked up late last year, for a couple of dollars. It was a kids camera, made to look like a set of binoculars used by the droid's in the movie. I thought it had the potential to be turned into some sort of vehicle & being the sort of "frugal" person that I am I grabbed it.

The pictures you can take with it are quite craptacular actually. Unfortunately I didn't keep the box to show you how bad it was, but if your interested to see this cameras' "performance" for yourself, then I suggest you have as look at Jakes' flickr account. He went to the trouble of doing a sort of review of it.

I originally bought it for it's kitbashing potential, but after opening the packaging & looking at the example photo's of what the camera could do, I was almost tempted to keep it & use it for its intended purpose. But alas, the film with the character's on it had fused together, rending the camera inoperative :(

Ok, enough about the camera, onto the fun bit, kitbashing!!!!

First I completely stripped every last bit of camera out of the case & chucked all the parts into my bits box. Then the case was placed in my draw for a year (to mature) & then I pulled it out last week to play with it :)

So, here's a lot of photo's to excite and/or puzzle you, enjoy;

With all the bells & whistles added on,

I've tried to list all the things I've used to build this vehicle with, but it's mainly just household detritus, beads, stickers & stuff from my bits box.

I hope to have it done before I head home at the end of the month. I'd like to get a few games in with it.

My desk has been cluttered for quite a while now. Mostly with modelling detritus, but also with two large paint racks. I made them almost two years ago as a stop gap. They have served me well, but I'm going to be putting my PC back together soon (after being packed away for about three years) & I'll need more room on my desk for a monitor. These old mofo's had to go!

Now for the piece de resistance!!!

Firstly, I thought of the most space efficient storage rack I could think of, one mounted on a turntable, so that all the sides of the paint rack could be used. Second, I considered the cheapest & easiest material I could find. After all, it's only gotta hold mini paint bottles!

And so, here's the components I used to make the beast;


I actually wanted to make this thing ages ago, but I couldn't find a cheap enough turntable. They were either made out of aluminium or beautifully turned out wooden types, all expensive....for me. I stumbled across this black plastic one in a discount shop last week. I was so stunned to find a perfect unit for my project that I think I may have scared the shop assistant with the gleeful expletive that escaped my lips. Anyway, I was happy, stuff her & her socially accepted norms.

This rack holds all of the paints I had on both racks, is the same height & takes up less of a foot print on my desk too. It's a win all round as far as I'm concerned.

I now have a whole lot more room on my desk that I can now fill with other stuff.

I bought these guys about five or six years ago, when I first stumbled upon their continued existence at EM4. I had long thought that they had been lost after Metal Magic closed up shop. It's a great shame that Metal Magic didn't market themselves well enough back in the day, because they really did make some fine minis. I only every saw their stuff in a calendar I picked up back in the early 90's.

So, once I had them in my grubby little paws I quickly cleaned them up, based & base coated them.....and then promptly left them in that state for half a decade :(

It's only been over the past year or so that I've come across other people's painted examples, which had the effect of giving me a well deserved kick up the bumb to get mine finished.

So, here's a group shot to kick off this here pictorial feast. Enjoy!


Here's a few of them that I think turned out ok, 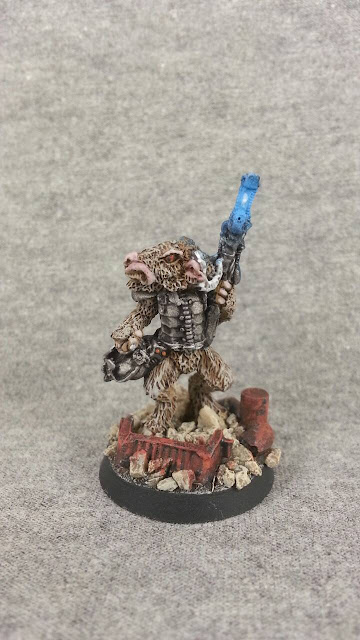 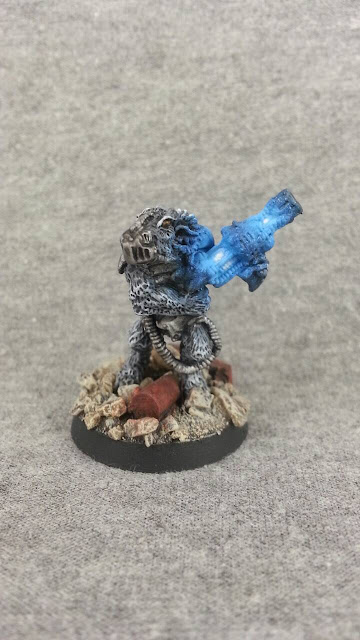 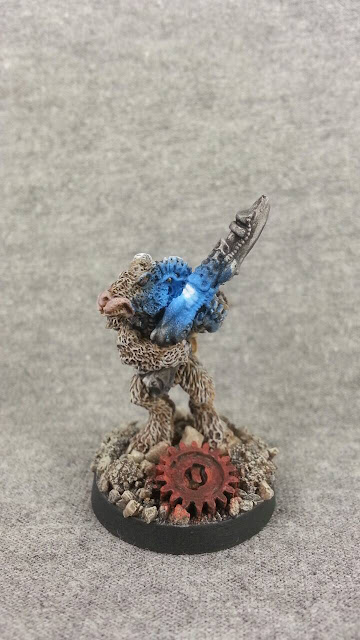 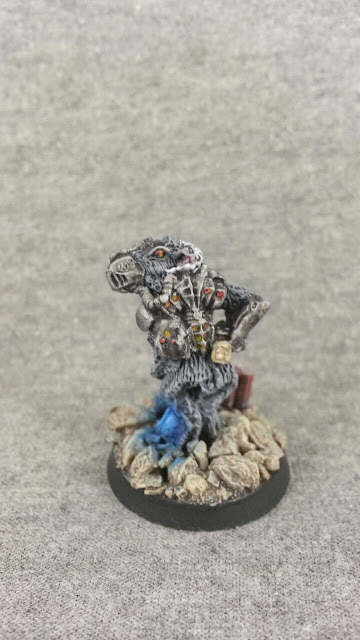 Like I already mentioned, their a bit glowy, too much in my opinion! But once I'd hit them with the airbrush I couldn't go back. I blame the tools.

I opted for a standard metal armour paint scheme on these guys. I don't think it would have been a good idea to introduce another colour to them alongside the bright blue blaster's :)

Well, more grist for the mill, ala troops for the tabletop done. I did a quick calculating the other day, after looking at my mini horde. I figured if I painted one mini a week it will take me about four to five years to get them all done. What a sobering thought!

I'll be taking these guys back with me to Australia at the end of the month, so they'll be getting some tabletop action soonish. Stay tuned.

Oh, and I'm well aware of that statement I made in my previous post, about never batch painting again. Lesson learned, never make promises in writing.....especially on the net!!!

Ok, time for me to bugger off.