The third instalment of four Rogue Trader scenarios that I played earlier this year. This type of game was one that I've wanted to play for a very long time, a Rogue Trader game in a fantasy setting.

A small Ultramarine force had been tasked with setting up an observation outpost on an uncharted planet. An Ork Warlord is suspected of using it as a base of operations to launch raids on passing Imperial trade ships.

The planet was thought to be uninhabited (apart from the Greenskins), but not long after they had finished setting up their camp they discovered the remains of earthen dwellings, a disused mine shaft and other such evidence of human occupation.

A few days later (while out on patrol) they came across a small party of Ork's, sleeping in the open. They had a rather run down Walker (AT-ST) with them, but they were completely unprepared for the Marines. In a brief encounter the Ork's were slain & the Walker left as a smouldering wreck.

The Marine's returned to their makeshift camp to file a report of their engagement. Unaware that the noise of the battle had not only been been heard by the local populace, but that they were now on their way to the scene to investigate the cause of the disturbance.


Ultramarines: Pushed around by Rob_s


Locals: Pushed around by me


And so it begins: 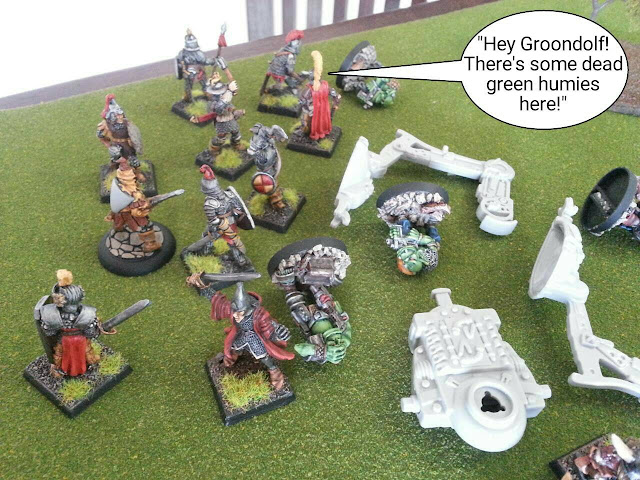 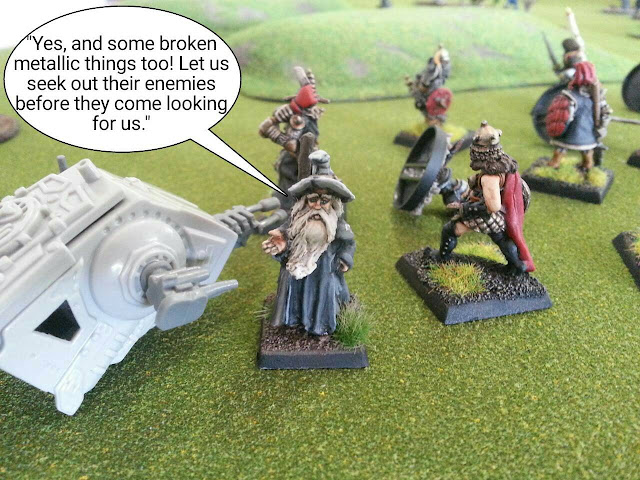 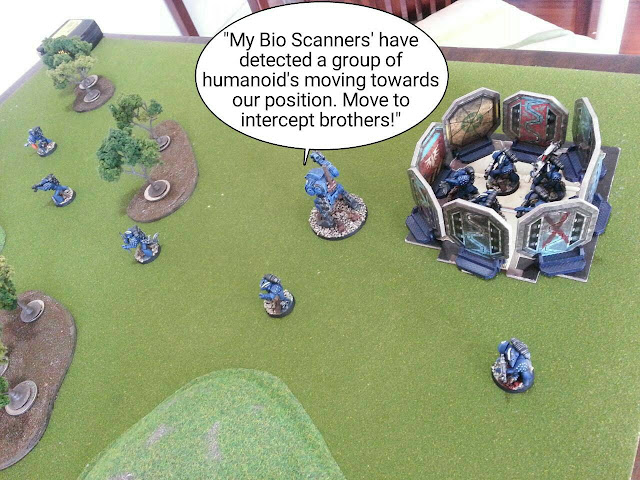 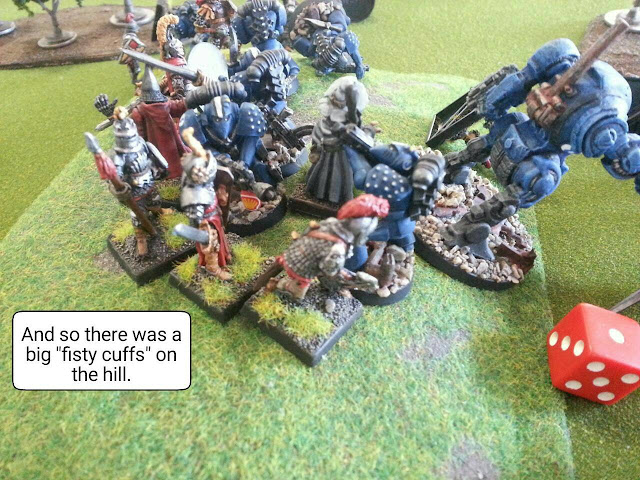 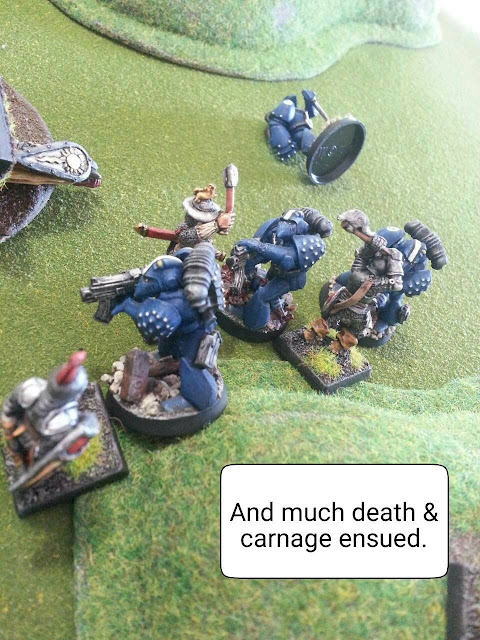 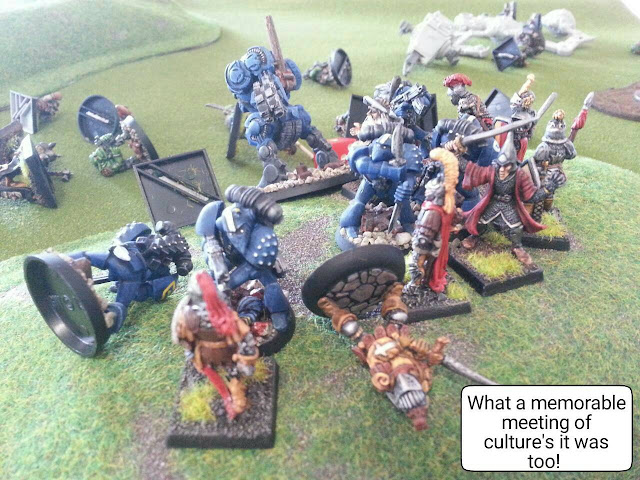 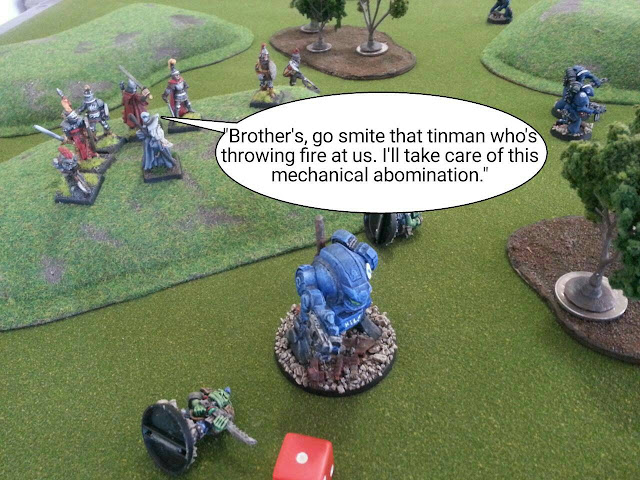 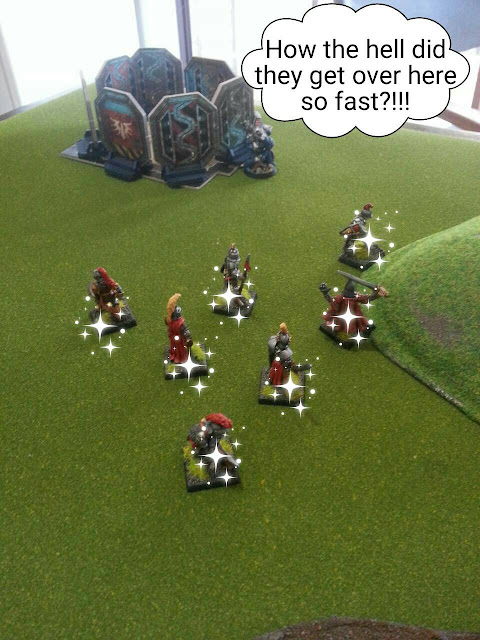 Even though I had rolled quite horribly for most of the game, we both agreed afterwards that chain/plate armour is not a fair match for a bolter. I think to play these sorts of games you need a lot of terrain and/or cover, just to give the normal populace a chance. Either that or have a shit tonne of them in reserve? Actually that might be fun :D

We had a great time playing this type of game. I think it warrants some further investigation.

I remember hearing about these types of games that were written about in Warhammer Siege when I was a teen. I wondered how you'd actually go about playing an equitable game (one side with guns vs the other with crossbows) without it turning into a turkey shoot. My gaming buddies & I never gave it a go, too much for our teenage brains to even contemplate attempting.

Then about five years ago I got hold of a copy of Siege and read through the whole book, for the first time! I was blown away with the & quality of the artwork, the detailed dioramas, the descriptions and just the sheer quantity of untapped possibilities, ripe for the picking. In my opinion it's up there with RT & 3rd ed Fantasy....I reckon it's that good.

In amongst all of the evocative illustrations, dioramas and complex (but awesomely detailed) siege rules, there's some random scenario generation charts. And more specifically, there's a chart solely devoted to playing mixed scenarios, pitting Fantasy against RT peoples/species.

Disappointingly though, I never got to see anyone playing it....over my entire gaming life (some 28 years worth). I never had the opportunity to witness or read about a mixed world game being played. No friendly face offs, no gaming convention display games, not even a WD batrep.....nothing! Which is a real shame, coz I think that if it was given the right amount of support I think it could have grown legs. Maybe even spawned a whole new direction for GW to take the RT world in? Who knows.....maybe it was just a fun little side project for Rick Priestley?

I have a couple of other theories (possibly more plausible than my previous supposition) as to why it may have not taken off as well; Most gamers (or more specifically GW gamers from that time period) usually only collected one type of miniature, either Fantasy or 40K. And you sort of involuntarily locked yourself into that gaming mindset....never thinking about them ever coexisting. Also, there was really no reason or opportunity to play alongside each other either. Be it in a tournament setting at each others homes. And lastly, when my friends & I got into wargaming we really only ever had the time and/or money to collect (and occasionally paint) one genre of miniatures. So we just played in one setting....all the time.


I'll definitely be exploring more of this style of game.

Ruglund's ladz go for a stroll with their dog.....and blast some stuff too.

The second semi linked game with the Ork's that I played. Once again, my buddy came up the scenario & my son and I played the two opposing protagonist's.

So, without further delay, here's the write up;

Silver Skull Squad Alpha Pappa (pushed around by my son).

Your Squad has been sent to requisition fuel supplies (fuel canisters represented by six white tokens) from the Hazelburg B refinery and return it to the Governor's palace. You have been told that they are critical to the ongoing war effort, though you suspect it will be used to fuel the Governor's personal escape shuttle. Either way you've been given your orders and you'll carry them out.

You must keep them out of Ork hands, either by holding the refinery or by moving them far enough away from the facility (off table) that the Orks will give up their pursuit.

You have a transport you can use to carry the canisters away, affectionately named "the beast". But it's terribly run down, the weapon systems no longer function & the Grav systems are on the verge of breaking down. If you try to push it too hard it could stop functioning all together, so take it easy....you've been warned.

Also, there's a rumour at the refinery that there's some sort of creature living nearby in a toxic lake (off the northern table edge). Making excessive noise in the general area could disturb the creature.

Ruglud's Ladz (pushed around by me)

Youz invadin da humies turf. Dis is da first step, a speed bump on da way to da big battle where all da ladz from all da ova clans will join up an smash everfing real good. I'll be bringin me dog wiv me too (FIDO), nuffin can stop us wiv him helpin.

Dis place has got da juice the humies need for their machines, wiv out it their stuffed. Take as much of it as you can. Maybe you can nick da humies ride as well? 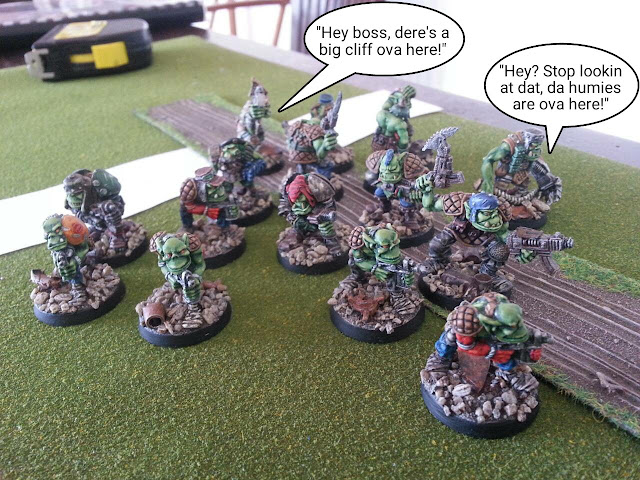 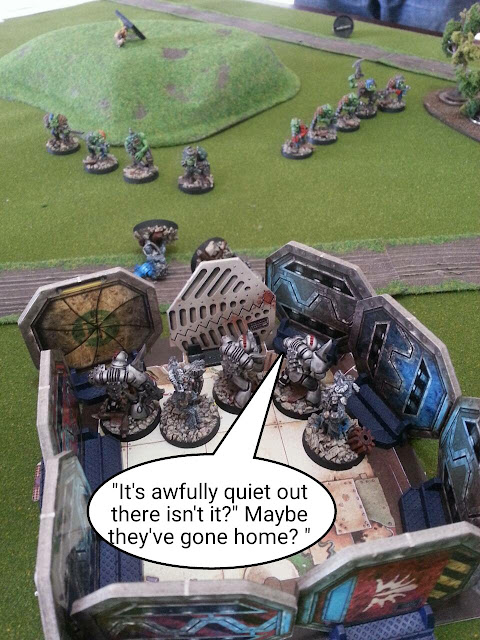 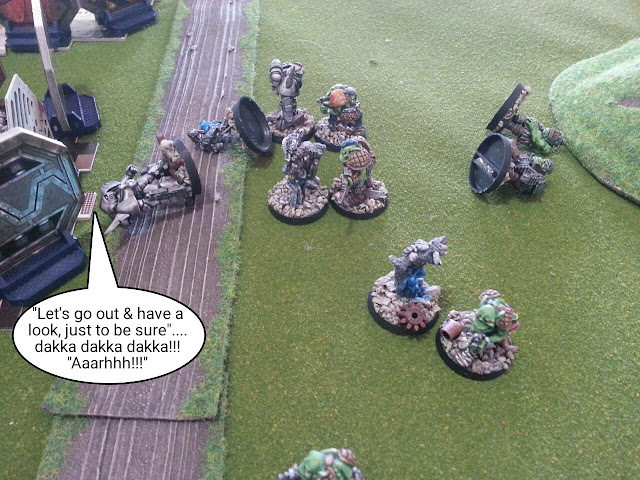 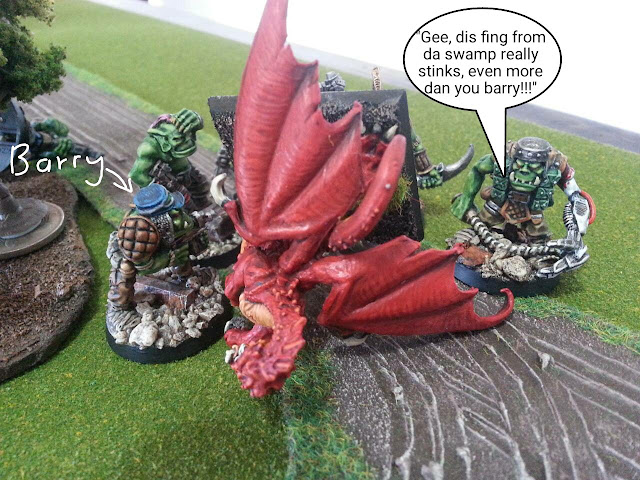 It would have been great for FIDO to have more of a go in the game, but I was determined to try and stop the transport early on. Ending up in his early demise :(

The Space Marine's forces were completely overwhelmed by the orks. Maybe a few more could have helped, but the Swamp Beast was intended to tip the balance in their favour. Obviously it didn't turn out that way.

I'm quickly learning that I need to brush up on my photographic skill's while gaming. I think it requires some extra thought as to how each photo will tell a story. Taking more photo's, from different angles, each turn should be sufficient. Hopefully it'll make the process of batreping a bit easier too. As I feel there's quite a few "gaps" in this story even though it was a very short game on a small gaming area. Photographically, there's a few connections between the action that don't seem logical. Anyway, practice makes perfect right? Either that or repeated mistakes :D

Having a dog with mental powers was a fun idea, it's a concept that I'll try to incorporate into future games.

The transport was a laugh, it started out with a max speed of 6 inches, but if driven at this speed then there was a good chance it could damage itself....which it did on the first turn. It's movement was slowed to an even slower rate of 4 inches. It then took damage from bolter fire, which made my son gun the engine at full speed again, slowing it further to a crawl. When the Swamp Dragon appeared and he tried to ram it with his "ram speed" it just casually stepped aside. After the operator was dispatched it just stopped.


So, that ends game two.


Lastly, I have a little bit of a dilemma that I hoping you guys might be able to help me with.  I forgot to take photos for one of the games that I played while I was at home. I've got all the action written down, but I'm at a bit of a loss as to how I could go about doing a batrep for it without pictures. I can't recreate it either, as I don't have enough terrain to properly replicate it.

Could you recommend an App that I could use to draw the battlefield? Or is there some other way of doing a batrep?  Oh, and I forgot to mention that I don't have a PC, I do all my stuff on my trusty (sometimes infuriating) tablet.