So, since my last post I've made a fair bit of progress on the bike. It's almost a complete unit now, but still requires quite a lot of detail work before it'll be done. What follows is a bit of the construction work I've carried out so far...albeit with a limited amount of photo's showing the initial phase of the build. I forgot to wield my phone camera at the start, as I was too focused on making the damn thing. You'll just have to believe me that I made this and not my neighbour :)


Now, here's some dazzling images for you all:

Here's some stuff about how I made some of the separate components:

That took me about a week to accomplish.....in between tea/beer breaks. I'm not going to give a time frame on this as I almost always never finish anything that I say I will. Let me just say that I'm happy with the progress so far. The only hurdle I have ATM is trying to source resin so that I can cast this sucker up once it's complete. The only supplier I can find here will only provide in minimum quantities of 10kg! A tad more than I'd ever need in my lifetime, or the next.

May all of your breathing activities be enjoyable :)

As part of my insane quest to build a MK14 Bullock jet cycle from scratch, I needed some RT style bolters to mount on the front. Suitably chunky bolters too, if I wanted to retain that oldschool aesthetic.

Unfortunately for me (and you too), Citadel never produced chunky RT style bolters, like the type found on the original bullock. Sure, they made them, but they were integral to a miniature, being held by the dude.....not the bolter on it's own. Well, I tell a little lie, they did produce a couple of "free standing" bolters, but they were titchy small.

The only other option was to use the RBT01 placky bolters. Their side profile is great, plenty of detail. But front on, their just too narrow compared to the original bullock bolters. So, the solution? I'd need to make my own. No biggy, I just raided my bitsbox for a couple of RBT01 boltgun's & set to work.

Here's how I solved my dilema:

Some of you may be thinking I'm mad, wasting my time. Could have easily just bought bolters by the dozen off of eBay. But I didn't want just any old type of boltgun though. There's two issues with the post RT bolters; Apart from all those stupid skulls sculpted onto every spare bit of space, the magazine is in the wrong place. Well, it's actually the correct place if you want to look at it from a logical &/or mechanical stand point. But aesthetically it's all wrong....for RT. And it would have shown up like dogs balls if I'd chosen to use them instead of the old style one's.

Anyway, it didn't take me that long to make it. And now I've made a silicone mold of it as well, I can cast them up whenever I feel like it. I'm sure I'll have a need for them in the future sometime.

Kulos' having a bath at the moment so I thought I'd do something else while I waited;

The topic of today's post is all about the MK 14 Bullock jet cycle. First illustrated by Pete Knifton, way back 1987 I think? His vision of what an RT jet bike should look like was the "ducks guts" in my opinion. But unfortunately, when the actual mini was released, I thought it looked shite. The reason's? Let me list them for you from my lofty position:

Firstly the poor guy can't even sit in the damn thing. I think I understand why GW went this way....using the placky marines from the RBT01 range was an easy fit. Whatever the real reason, they just look plain wrong standing in the saddle :(

Second, The bike is way too small. Reminds me of those monkeys you see in Circus acts. You know the ones, where they force the poor chimp to ride a kids bike around the circus arena dressed up as a clown.....fail.

Third, the sculpting is really quite poor. Not much detailing on the bike itself & the side skirt thingy looks like it was knocked up in a couple of minutes....really, I'm not joking! I kinda get the impression that it was rushed through production.

Lastly, and most importantly, it just doesn't have any real "presence" on the pretend battlefield. The "I'm a bad hombre riding a big fuck off jet bike", kinda presence! The only image that comes to my mind when I see them is "Look! Here's comes something that looks like a monkey fucking a football!" It's a bit of an extreme description, but it's the true, full-stop!

So, what's the point to all my venting? Well, I aim to rectify the manifold design deficiencies in the original. No matter how personally ill conceived they may be. Come hell or high water I'm gunna make this thing look as suitably intimidating as I possibly can....the way Pete Knifton envisaged it to be way back in 87. 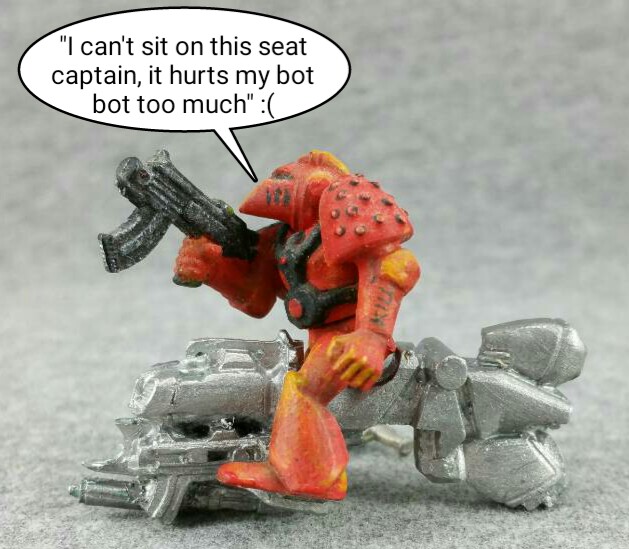 And turn it into this:


Here are the main areas I'll be concentrating on modifying: 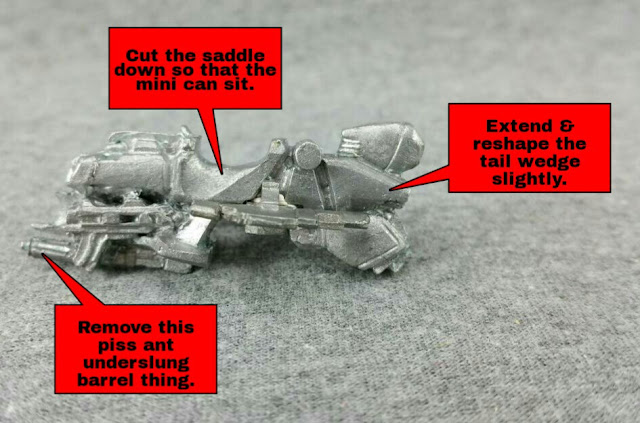 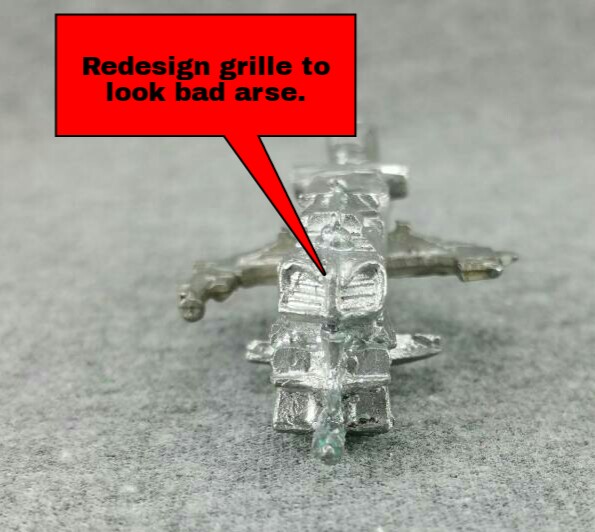 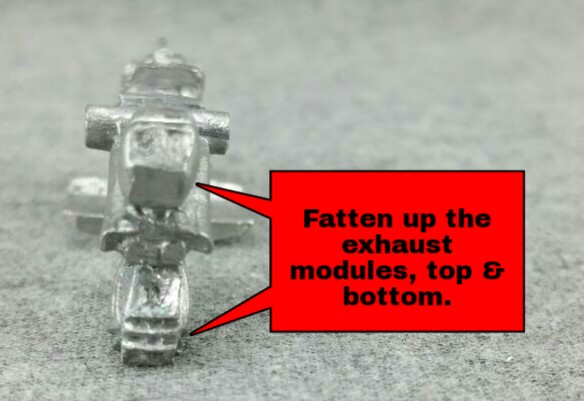 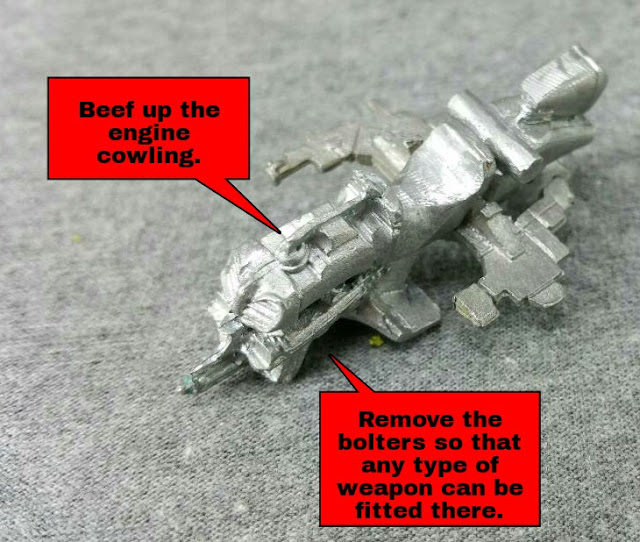 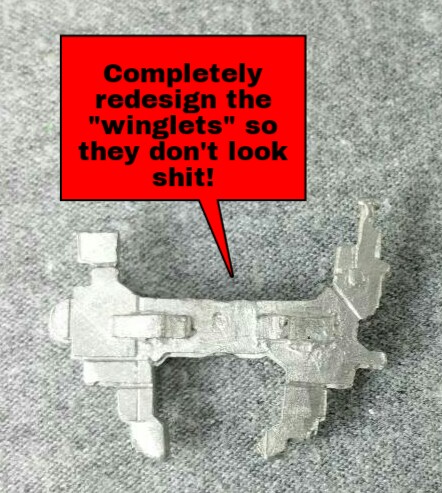 Hopefully, once all these steps have been carried out it should look the goods :)

I've already begun a small part of this project by modifying a set of RBT01 legs, so that the poor bugger can can sit in the seat.

Yet another project to occupy my time with :)

Kulos' coming along....slowly. This is my first GS sculpting experience and I have to tell you I'm a little daunted. I suppose I should have started with something small, maybe making a finger or a weapon head instead? Bitten off more than I can chew trying to sculpt up this much, but either way, I'm having fun playing with the GS, so even if I fuck it up good I will have learnt something.


Ok, now the talky bit, where should I begin? Let's start with his Gut shall we.

This was done in a few stages. I'd heard that some sculptors wait until each section has fully cured before moving onto the next stage, for fear of running their previous work. And seeing as this was the first time I'd used GS I decided to do the same, but I was surprised at how long it took to cure. It took an age for it to solidify enough so that I could move onto the next bit. I ended up doing one bit a day, so it's taken me almost a week to get it to the stage your seeing it at now.

I'm also trying to include all the equipment Kulo has listed in his description as well. Two of which are Rogue Trader Suspensors, this fatso has two of them on his person to help offset his weight problem. The thing is is that I've never actually seen a picture of one, so I asked the question over on the Oldhammer forum. So after getting some help on there I settled on using some small discs to represent them. After rummaging through my bits box I found a couple of model car instrument dials. I also decided to attach them where most of weight would be..... His gut :)

About the arm's, I bought some Ogre Kingdoms one's to use for Kulo, but when I got hold of them they looked far too chunky. The alternative was to use standard Ork arms, which are way too muscular. I would have had to GS the hell out of'em to fatten them up enough. So, I went back to using the old Ogre arms, but with the forearms reduced in length & the shoulders cut back. They'll still require quite a bit of greenstuffing but I think they'll look better in the end than trying to use the Ork arms...time will tell :)

I'm also thinking of giving him a T-shirt coz his gut looks a little plain, but I'm not sure yet. I suppose it's hard to tell how it's going to look once he's all painted up. The green & metallic surface don't help in giving me a complete picture.

So as it stands I've gotta attach his arms, bulk them out & smooth them onto his body, make a Neuro Disruptor and give him some detailed work.....quite a bit to go.

I'm kinda on the fence with how he's gunna turn out. It's still too hard to tell at this stage for me. What do you guys think of my efforts so far? Worthy? Rubbish? Misguided? I'd be interested to know what you think.