I've got four of these guys to do!

I've put together four RT dreads now, and they've all been modified in some way. These two have had a couple of different operations;


The one on the left has had his legs straightened, to make him stand upright. And I've rotated his right elbow so that his arm is out stretched.

His brother beside him has had his knees & feet repositioned so that he looks like his walking forwards more. And I've also -quite obviously- swapped both arms too. The left arm was pinched from a Mechwarrior toy, while the right was kitbashed from a couple of capacitors, toy gun, couple a beads, wall pin, wire and an old pen lid.

Now they both must face the wrath of my paint brush!!!!!!

Cheers.
Posted by Mr Papafakis at 01:08 No comments:

For the up and coming gaming bonanza that Rob_s and I have planned in about a months time, I decided that I should rustle up some dreadnought's.

One of the things that I really like to do in gaming is to create/convert. I'm not that good at it, but I like giving it a red hot go either way. So I decided to try my hand at making a siege dreadnought, like the one's mentioned in Warhammer Siege. They came equipped with a variety of apparatus for breaching fortified structures i.e. retractable ladders for troops to scale walls, morning stars or hydraulic rams to smash reinforced doors to bits with.....heaps of cool stuff!

My first attempt at fitting a ladder to the dreadnought failed. It was to big for the mini & it ended up looking like it was buried under it. I forgot that siege dreadnought's were actually "large" dreadnought's, capable of carrying huge amounts of weight. Alas, I wasn't in the mood to scratch build an upscale version of an RT dread, so I had to redesign the standard model I had.

After a couple of iterations, here he is, primed and ready.

As you can see i repositioned his legs too. I scratch built the hydraulic ram & the power unit on his back. The large right arm was donated from a Mechwarrior plastic figure. I ran wires from both arms to replicate hydraulic hoses. Time will tell if this guy works or not. Once he's painted up, then I'll know.

So until next time,

Keep your pants on.

Posted by Mr Papafakis at 08:24 No comments:

Hope you got the "Blues Brothers" inference in the title. If not....oh well.

Just finished putting the finishing touches on 30 odd space marines today. Three different chapters, two of which had not gotten past the base coat stage for just over twenty years!!!!

The other chapter I'd put together a couple of years ago, but couldn't decide on the final paint scheme, so it sat idle too.

I think I'll post up the Ultramarine's for today.

First up, the group shots. Couldn't fit them all in one shot without them appearing as ants, so I split then into three. 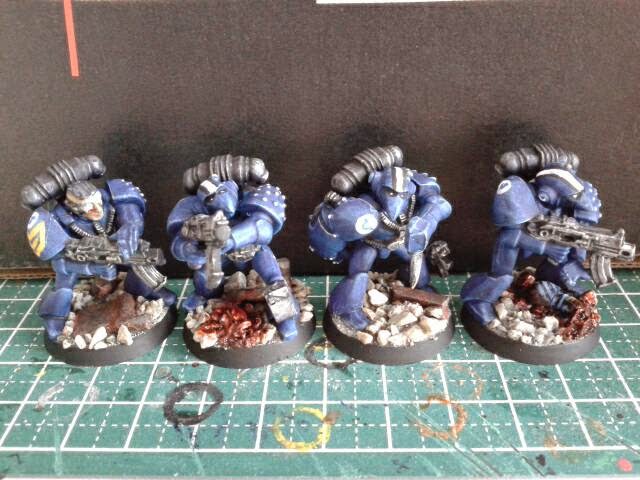 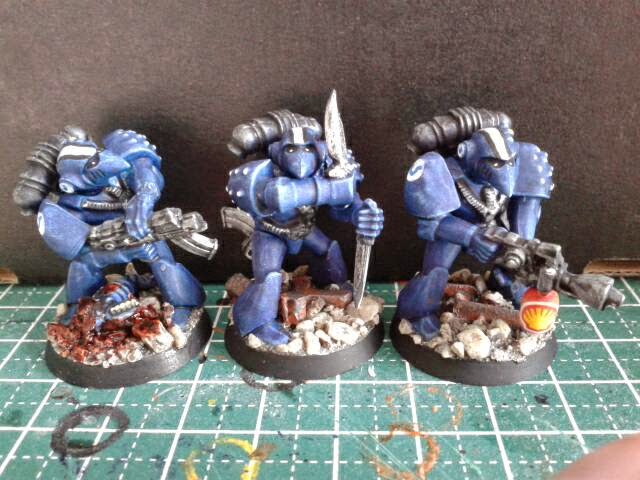 I'm pretty happy with how these guys turned out. A couple of drybrush layers, followed by a few ink washes was all it took to get their armour done.

Made a little more progress on the walker;


The basic howdah is completed, made from a couple of plastic bowls & cups. The black rim was made from an old cut up DVD case. I couldn't, for the life of me, find an appropriately sized "light box" that's pictured in the illustration. So I got a couple of plastic jewellery cases & stuck them on..... it'll be fun trying my hand at painting headlights freehand :)


Because of the problem mentioned in the above picture I had to come up with a way of increasing its rigidity without adding too much weight. I was going to inject "expand a foam" into the cavity, but I didn't have any at hand & couldn't be arsed going to the hardware store to get some, so I improvised. I cut up some scrap polystyrene into small chunks, mixed it up in some latex glue & pushed the concoction into the space, homemade "expand a foam".....win!

The next step is going to be constructing a winch ladder, railing & chequer plate for the flooring.

So until next time chums, Aduer :)

Helsreach, the largest settlement on Logan's world. Here, "you will never find a more wretched hive of scum and villainy"........well, that's what it says in the brochure anyway.

I've always loved the illustrations within RT, and among them, some of the most inspiring to my mind were the one's devoted to Logan's World. Specifically the one showing the slavers striding across the barren landscape in their giant Mech walkers.


Amongst the many and varied ideas I've had for creating vehicles to game with, this one has remained relatively easy to accomplish (It just took me over twenty years to get around to starting it, that's all). It's based off a Macross 1/72 scale Destroid kit from Ban Dai.

I've put the lower half of him together already, now I've just gotta figure out how I'm gunna go about constructing the howdah. Plus, adding all the accoutrements that a "well to do" slaver would need to ply his nasty trade with.

So as you can see, there's still quite a lot to be done.

So, without further ado, let's begin;


First up is a pic of an Ultramarine. He's one of a ten man squad that I'm in the process of painting up (along with a bunch of other RT minis).

I decided a homage to one of my all-time favourite diorama's from Rogue Trader would get my enthusiastic juices flowing (insert crude NSFW comment here). I'm trying to replicate the colour scheme & insignia of the Ultramarine's depicted in Dave Andrews master piece.

And here's a close up of the marines in question,

This grand undertaking began a couple of weeks ago when myself and "Rob_s" - "6 Iron Spikes"- decided that we should play some RT scenarios. It should kick off in about a month or so..... just enough time to paint up some more dudes & terrain.