The hobby industry, as we all probably know, operates in a very competitive market. And as such, each manufacturer is trying really hard to come up with new & exciting products for us hobbyists to buy. But quite a few of those products are a bit of a con i.e. Clump foliage, Basing material, Gravel....for christs sake! and Weathering powders.

About five or so years ago when weathering powders hit the market (in my hobby sphere they did anyway) I had no idea what they were, just thought it was some new magic stuff that made metal look aged. But after I saw how much they wanted for the them I gave them the middle finger. Did a bit of a research online though, and discovered what they were derived from, but took it no further, as I didn't really need them....just wanted them :)

Just in case your not aware, weathering powders are just pigments. The "base" that gets added to the liquid mediums to produce paint. That's it!

Fast forward a few years when I started doing a bit of Kitbashing, and that's when I thought about pigments again. Weathering large areas with paints can be a bit of a pain in the rectum. So I decided to make my own. Thought I'd do a small tutorial on how I go about making them at the same time. So read on if I've not bored you to tears already :)

First, get hold of some cheap acrylic pastel sticks. Just make sure that their acrylic and not oil! otherwise your stuffed. Then steal a small cheese grater from your kitchen without your other half finding out or she'll brain you. 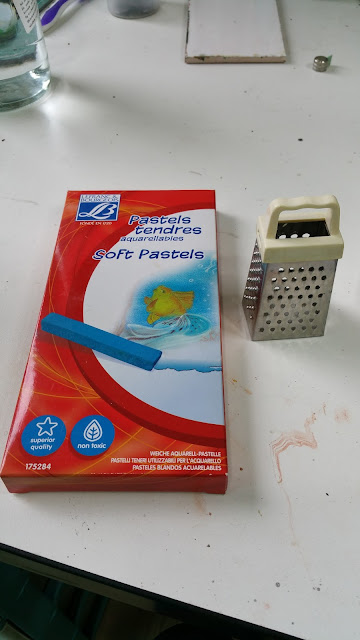 Grab one of the little bastards and.... 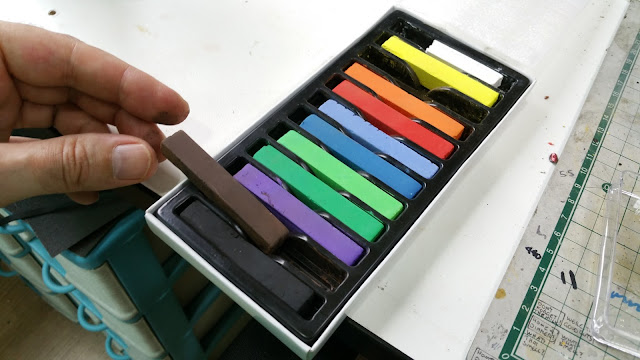 Grate like a madman! It's actually really easy, just use the finest grating side and apply a small amount of pressure. I found that grating at an angle reduces the chances of the pastel chipping quite a lot. Just play around and you'll figure it out. 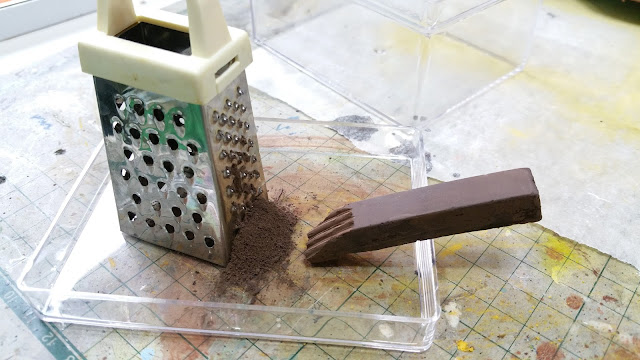 You'll end up with a nice pile of brown.......weathering powder! 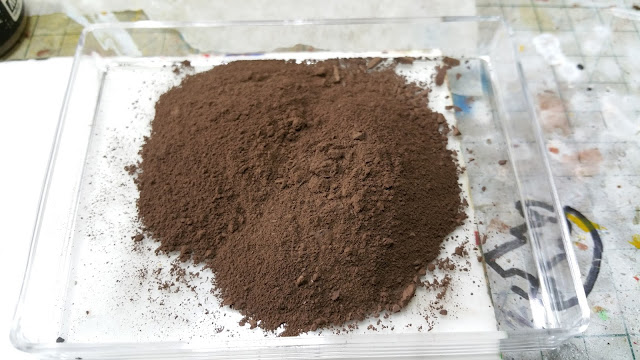 Here I'm just showing you a comparison of the "real product" beside mine. It's just the same stuff! 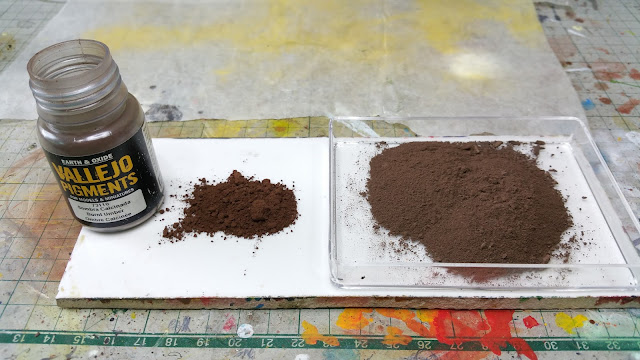 And after about half an hours work I ended up with every colour in the rainbow. I can mix & match to my hearts desire. Piece of piss hey! 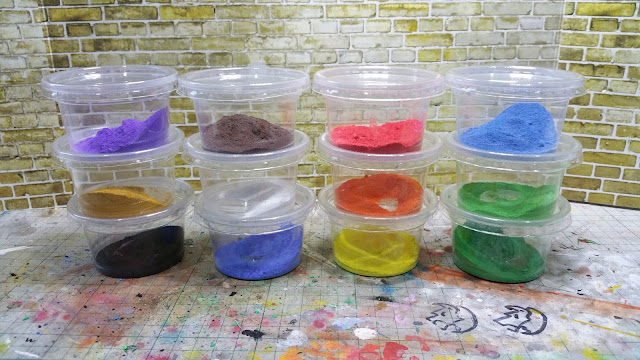 Hope I haven't done one of those "sucking eggs" tutorials again. If I have, just let me know in the comments section and I'll delete it, seriously!


I think you'd be pretty hard pressed to find a single hardcore RT fan out there who, at some stage in their life, hasn't gazed upon this illustration and thought to themselves "Gee I'd love to have a mini of him". But alas, as we all know GW never produced one......sigh :(

And unfortunately, for us mere mortals, he's not a model that can be easily converted up either. There's nothing in miniature that really comes close enough to replicating his "look". He's got sooooo many things going on with him, stylistically, that even if you were lucky enough to find said miniature, you'd still have your work cut out trying to find or make all of the other components required to make him.

So, why am I waffling on about this with you all then? I'm just stating the bloody obvious aren't I!? Well, I've been wanting to attempt to make him for at least a couple of years now, but, as I just mentioned, I could never find a suitable mini to base him off of. Fast forward a year or so, and I now think I've managed to collect enough bit's & bob's to have a REAL crack at it.

But before I go on, some of you out there (most likely all!....I'm terribly slow with Internet goings on sometimes) will be aware that as part of Diego's Space Raiders 3 Kickstarter campaign, Kev Adams sculpted a miniature version of him. And even though I think it's a really cool looking mini, and as much as I love Kev's work & have the up most respect for his awesome sculpting abilities, for me, it's still not close enough to the original. Yeah, I know, I can be a bit fussy sometimes :)

Having a closer look at the green I think I know why he chose to alter some of the sculpt from the illustration though. Most likely because it'll be cast up as a single piece miniature. And as such, considerations needs to be taken into account of undercuts & part thickness etcetera. But, luckily for me, I don't have any of those constraints. I'll be making my version as a one off, to be painted upon completion.....not cast. So hopefully, fingers crossed, I'll be able to get closer to the illo :)

I began by breaking down all of the design elements from the illustration into separate sections. To help me lock down each component that I'd need to find to build this sucker. Here they be; 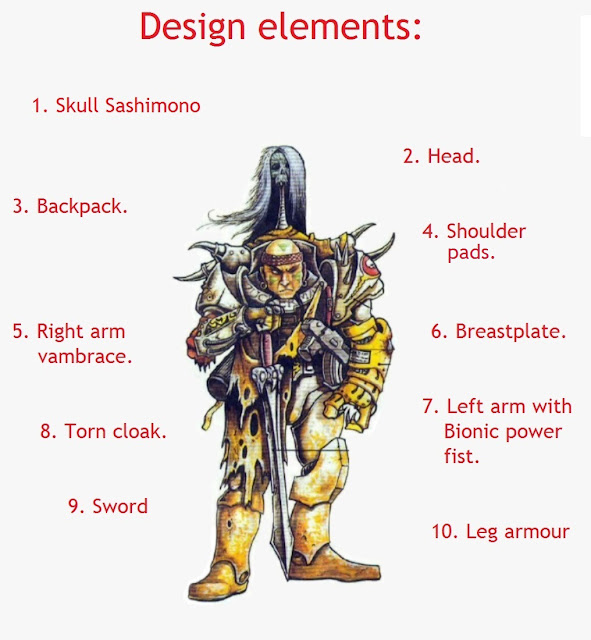 As you can see from above I sorted him into ten different, unique and almost impossible to find elements to make him from, piece of cake huh? So next came the fun part......trying to find similar looking mini's and/or parts thereof, and figuring which of these would be useful to make Joff from. Here's what I've managed to cobble together so far; 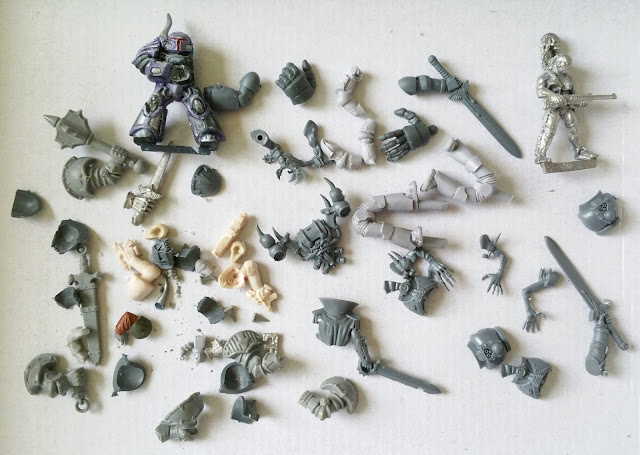 Some of these items will most likely not be incorporated into the final mini, but their there anyway, just to aid in the visualisation process and to try out fits of varying scales.

Let's see what I've been up to so far;

The head & skull Sashimono will be mercilessly raped from the Copplestone mini pictured below. This particular miniature, not surprisingly, was what triggered my enthusiasm for beginning the Joff project in the first place.

Breastplate is from a space marine. I've begun reshaping the collar and neckline area to suit the design better.....still a ways to go though.

Legs are from a heavily modified set from forgeworld. I spent ages looking for a mini with a natural standing pose. It's virtually bloody impossible to find a miniature in that stance for some reason.

For this project there's several challenging sections for me to make/convert. The first is most probably the most obvious to you all; the Bionic arm with incorporated power fist. I scoured the net for ages trying to find a fist, hand, claw or any other suitable appendage that closely resembled it, but alas, no joy. So, in the end I settled for a ghoul hand. It's gunna take a lot of work, but I think this element, on it's own, has the potential to either make or break the overall look of the mini. Second will be the shoulder pads. Their not THAT complex, but they'll still require a fair amount of work to get their shape right. Then there's the sword. That's gunna be a real bugger, shaping the blade to fit the illustration & adding those bird skull thingy's to the hilt. And lastly comes the torn cloak....never done that before, so I'm gunna be looking online for help with that. So yeah, a few painful bits in the build. But as far as everything else goes, I'm not worried, everything else should be fairly easy....famous last words hey chums :D


I'm hoping to have him done for BOYL....this year! I'm not sure if this is wishful thinking on my part or just another one of my hobby delusions, but I'll give it a bash anyway :)


And erm er, bye to youse all.