When I was a young teenager growing up in Australia I used to read a British publication called "GM magazine" (and just in case you didn't know, the GM doesn't stand for General Motors, it stood for Games Master). They reviewed all things fantasy, be it LARP, tabletop wargaming, books, PC & Amiga games etc, but, they also used to show some of the "runners-up" of the Golden Daemon painting competition.

Well, amongst all of those lovely 2nd & 3rd place entrant's were quite a few of Paul Bensons' entries. His stuff was usually more than just a cool paint job. He was one of the pioneers of creating detailed custom bases..... I reckon he had shares with Milliput :). And just about every mini I saw of his also had some part of it either tweaked, swapped or modified in some way.

Why am I telling you this?

Well, I'm a bit of a tinkerer as well when it comes to miniatures, It's what keeps me interested in the hobby. Being able to create something different is a major reason why I still enjoy it so much.

There was one dreadnought that Paul Benson did that really caught my imagination. It was a pretty simple conversion, but it looked great to me. I don't have the original photo from the GM magazine, as I foolishly cut out all of the cool pictures as a teen..... their long gone now, sigh :(

But, luckily it was photographed and published in "Fantasy Miniatures 1988" (a publication put out by GW, showcasing some of the stand-out entrants to the Golden Demon competition).

Here tis, the one on the right. Face plate & custom flamer was all it took to make this a favourite conversion to me. The one along side had a subtler modification - rocket backpack - but it's a good illustration of how Paul Benson found it difficult to leave standard miniatures alone. 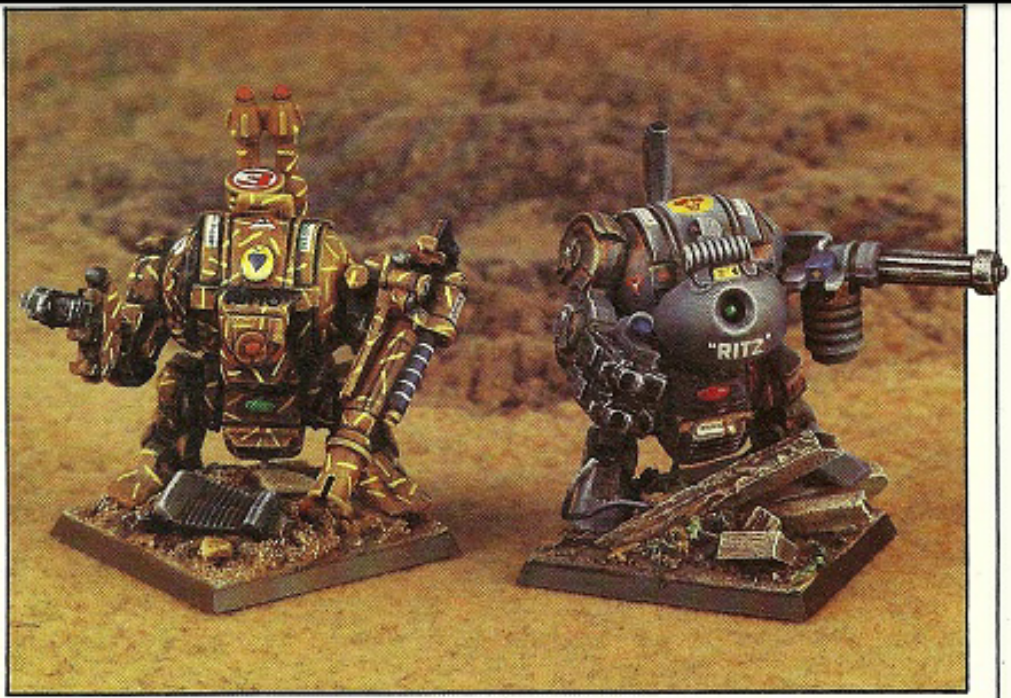 So, after that long winded intro, here's my "tinkering" output,
﻿

For the 1st & last one, I tried to emulate the colour scheme of the Dreadnought's pictured in Dave Andrews awesome diorama:


I painted these the Oldschool way......dry brushing several times, in between a couple of ink washes. For these minis I think it suits them.

So until next time,